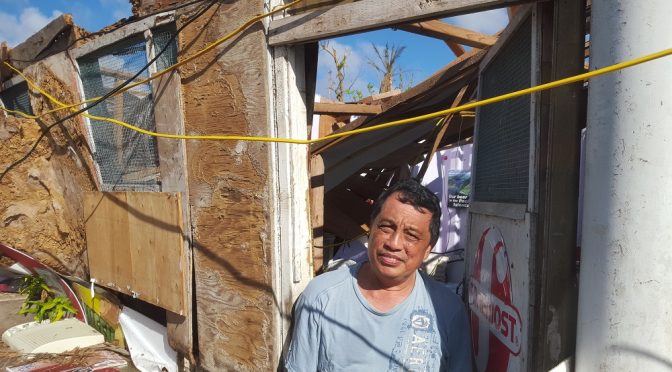 “We cannot chase him away. Where will he go?”
Randy’s Typhoon Yutu Story

It was four days after Typhoon Yutu tore through the islands of Saipan and Tinian, Commonwealth of the Northern Mariana Islands (CNMI), and Joeten Supermarket in Susupe, Saipan had just re-opened to the public, and so, it would be the first time I would resume my morning routine of checking the shelves for fruits and vegetables.
I approached the worker dutifully stocking the shelves in the produce department of Joeten Supermarket. His name is Randy Vicente. Originally from Cavite, Philippines, Randy has had only this one employer in his twenty-five years on the island. And, in all the years I’ve lived on Saipan and shopped there, Randy has always been quite friendly, always offering a bubbly “Good morning, Mr. Walt!” offering information on upcoming sales, asking if there was anything he could help with, and making this mundane experience quite pleasant. Today was no different in that regard. However, I could tell something was different. The area around his eyes had the telltale darkness and showed the strain of someone who hadn’t slept in days.
“So, what’s your situation?” I asked him.
“Oh, me? I’m homeless!” he replied, and despite the direness of what he had just said, he delivered it with the same bubbliness and smile as if he were greeting me on a normal day. “My roof is gone, and my apartment is destroyed,” he added.
“So..So, where are you staying?”
“Nowhere,” he replied. “For the past four nights, I’ve been sleeping in the front lobby of World Resort.”

(In this video, I asked Randy if the hotel staff and security gave him a hard time while he was in the lobby. He said no, but he overheard them saying “I cannot chase him away…where will he go?”)

“Did you try sleeping in a shelter?” I suggested.
“What shelter?” he asked.
I had heard from another worker that Saipan Community Church had a shelter. I told Randy about it, and he confirmed that he, too, had heard about it just that same morning, and would be giving it a try that evening after work.
“What about your stuff?” I asked.
“Oh, it’s still there.”
“You mean in the apartment?”
“Yes.”
During the storm, as Yutu’s Category Five winds increased in intensity, Randy realized his apartment would likely not withstand the pounding and so he sought refuge and rode out the storm in the Nauru Building close by. He returned to find his room destroyed.
It saddened me to realize that here he was showing up for work for his 6am to 1pm shift, as he’d done for 25 years, spending precious daylight hours unloading boxes, stocking shelves and helping customers, while his own personal belongings were sitting in a roofless single room with only three and a half walls exposed to the elements, and with nowhere to return to shower and get a good night’s sleep. I thought about the indignity and mental strain of sitting in a hotel lobby hour after hour, night after night, while hotel staff and security guards passed by knowing you weren’t a guest.
The thought also crossed my mind that what was needed was some sort of free storage facility for typhoon victims.
With no tourists arriving these days, many of the hotels are offering a local rate of about $70-$80/night. It’s a small thing, but I’d like to provide Randy–and anyone among the hundreds who are living in tents or in their cars– a few nights in a hotel to regain some semblance of normalcy and dignity, and to replace some of their damaged, water-soaked belongings. Electricity, running hot and cold water, a bathtub, a clean, soft bed, the privacy of a toilet–one that flushes and is not shared by dozens of other individuals–these are a few of the “luxuries” you take for granted, that would make a world of difference for victims of Typhoon Yutu three weeks after the storm, even if it’s only for two nights. Your donations will offer such a gift to Randy, and others, to encourage them to stay strong….CNMI strong. As usual, I’ll film the disbursements so you can see how your contributions are actually impacting real people’s lives. https://www.gofundme.com/cnmistrong