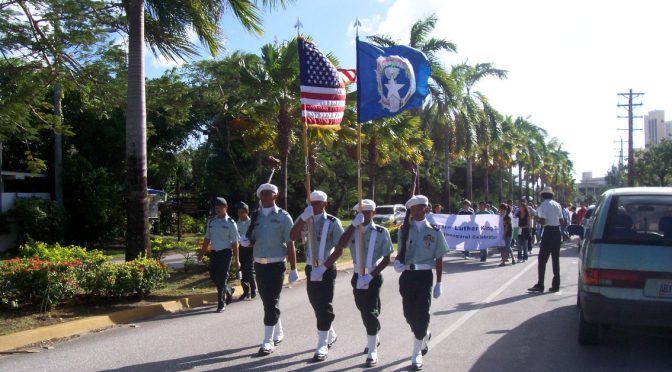 First a little background:
In April 2006, CNMI Governor Benigno Fitial signed the bill enacting Martin Luther King Jr. Day as an official CNMI holiday to commence on January 15th, 2007 (You can see my coverage of this in Walt’s Escape from America (Opens in new window). In the past, there had been commemorations of MLK Day on island supported and hosted by private individuals and groups. Now, as an official holiday, this year’s commemoration took on particular significance. it was appropriate to do something more than in previous years. This excerpt from a letter sent out to local leaders and media explains: Initial program plans include an open-to-the public “Rally, Reflection & Recognition” event with guest speakers, a keynote address, and a “Freedom March” centered in and around the American Memorial Park. Also featured will be the presentation of a “Young Freedom Fighters Award” to local student-winners of our school-wide MLK Essay/Speech Contest. Cynthia E. Nance’s selection as Keynote Speaker comports with the stated 2007 program theme, as the first woman and first black dean of the University of Arkansas at Fayetteville, Law School and as a Professor of law.
To place Dean/Professor Nance’s accomplishments in perspective, it should be known that Arkansas is where Governor Orval Fabus, in 1957, in defiance of the orders of President Eisenhower to admit black students to Little Rock Central High School and in the face of the National Guard, and in the eyes of the world, vowed publicly that black and white children would never be allowed to attend school together in the State of Arkansas. Dean/Professor Nance, in the true spirit of Dr. King’s dream, has “over come” such entrenched barriers of racial discrimination in education and employment opportunities, and her professional and academic achievements serve as an inspiration to freedom loving people everywhere. So things started back in December when the planning for the CNMI’s first official Martin Luther King Jr., Day kicked into high gear. The planning committee of the African American Cultural Preservation Committee (attorney Joe Hill, president) here on Saipan met every week and as the event closed in, we met every other day in the lobby of the World Resort Hotel.

After weeks of planning, the day finally came, and we met and welcomed Dean Nance at the airport at 1:00am Friday morning. With singer singing, ukulele playing, cameras snapping, the Dean was welcomed in style to the CNMI!

…and then we wait for luggage

With a full itinerary, the Dean was on her way to Rota that Friday morning, Tinian the next day and returned to Saipan on Sunday. The Tsunami (see Angelo’s account;opens in new window) delayed things a bit.

On Sunday, there was a reception in her honor at Judge Lizama’s residence.

Monday (MLK Day), found us all busy setting up the stage, moving tables and chairs, setting up sound systems and everything else one needs for an inaugural commemoration.

As organizer of the MLK Essay and Elocution contest, I was up at 5am reading essays, creating handouts for the judges, and then was off to Joe Hill’s office at 7:30 to make photocopies of all the entries. Along with Dorothea Bryant and Angie Wheat, we hosted and judged the elocution portion of the contest that morning.

Of those who received the announcement ON ROTA, 6 students chose to participate, and their principal found a way to get their essays hand delivered to us IN TIME!!

There are students, educators, even strangers who graciously chose to sit through the chaos of this our first event to support the children and the intention behind our efforts.

So, along with yours truly, there were 3 judges (Dorothea, Angie and Laura) who–all drafted at the last minute–chose to listen to and judge the speeches that morning, then chose to work tirelessly (without ANY complaint whatsoever) the entire day (missing the march, and portions of the ceremony, feeding themselves at their own expense) in order to diligently grade EVERY student’s written essay. (Thanks, ladies, for putting up with my spontaneous, last-minute chaos!)

Shots from the Official Commemoration!

Park Ranger Kelchmer (is that your official title?) prepares Dept of Public Safety Commissioner Rebecca Warfield to project the “look of authority” while retaining a woman’s mystique and grace

Note: the next several shots courtesy of Angelo Villagomez

Monday morning’s cleanup of Makaka Beach was a success. Participants from MOVER, MINA, RC&D, Rep. Kaipat, Rep Waki, and Mozell’s Boys picked up trash and bushcut our own tall grass. The Saipan Tribune covered this cleanup, which was part of the “Day on, not a day off” celebration of Martin Luther King Day. Over 30 people attended this cleanup

And now, ladies and gentlemen, our keynote speaker…

The evening was inspiring as well as entertaining, and was a great kickoff for what will be an annual tradition which will grow in attendance and participation….

Well done to all who stayed up late, got up early, donated their time, energy, ideas and passion to make this long-awaited day a reality here in the CNMI!

Special thanks again to Ranger Kelchmer for letting us use the office for grading the essays!

And even though this is a personal blog, I’d like to spread recognition of appreciation
by way of the following:

(NOTE: check back to this post for links to videos, winning essays and even more photos!)

But wait! It’s not over yet!
Having made the 10,000-mile trip from NY to Saipan myself three times (that would be a total of 5 times across the Pacific) in less than 9 months, I know firsthand how it feels. I also felt that having come all this way, the Dean should at least get to see some of Saipan’s native beauty beyond the scheduled talks, official meetings and presentations that filled her schedule. So, I plotted a friendly “kidnapping.”

I arrived at Kagman Elementary school on Tuesday afternoon after the second of the official school meetings, managed to tick off fellow committee member Sam Joyner and a few teachers (sorry ladies, didn’t intend to offend anyone, but kidnapping’s a dirty job that wins few friends) and sort of pushed my agenda forward to add some down-time activities to the Dean’s stay!

It was about 3pm. With only a few hours of daylight left, and since we were in Kagman, I first took the Dean part of the way down the trail to Forbidden Island (um, don’t tell AAPC president Joe Hill, he’d have a fit!)

…then to Tank Beach

….she asked to stop by Judge Weiss’ place, so we did that for a few minutes…By then it was about 4:00pm, the daylight hours were dwindling, so the Judge graciously sent us on our way with his own recommendations on where to take the Dean.

….then I took her to a little-known trail to a secluded fishing spot (introduced to me by Captain Carlopens in new window) near Marpi Point just in time for a great view of a Saipan sunset! Man, that’s a steep trail! Kudos to the dean, who, ill-prepared for my kidnapping itinerary, and dressed in only sandals and with a toe she hurt earlier in the day, completed both the Forbidden island trail and the Marpi trail in fine style (i.e. alive to talk about it!)

…then to Bird Island

…and on the way back, took a wrong turn and ended up at the Grotto. By then it was dark, so we didn’t get to see much. Within a few minutes one of Saipan’s Finest showed up (wonder if news of the kidnapping got out!). He asked if everything was alright. I told him I was fine, and that the Dean was treating me well. Or maybe he was asking HER…hmmm, …in any event, the Dean and the officer had a nice chat about the undersea world of Saipan’s diving spots while I wondered if he was secretly detaining us waiting for “backup” to take me down!!

No SWAT teams showed up, so I chauffeured Dean Nance back to the World Resort to meet with Joe.

My work here is done!

The next morning (Wednesday), driven to the airport by Rose Smith, the Dean and a few of us had a small farwell gathering…

Willie, Rose, Dean Nance, Joe, me (one of these days I’ll see Willie smile in a photograph, I just know it)

Dean Cynthia Nance shows her ticket to the gate agent, walks up the ramp, and heads home.