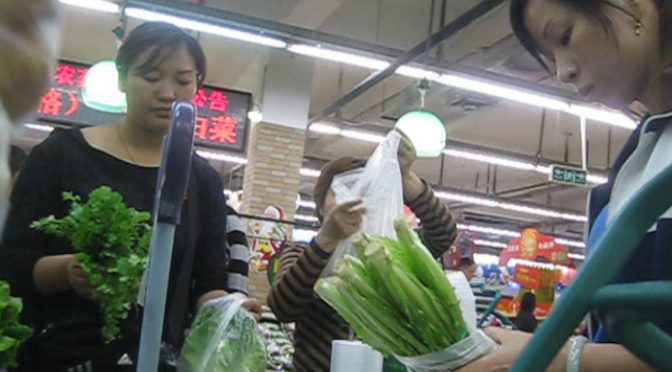 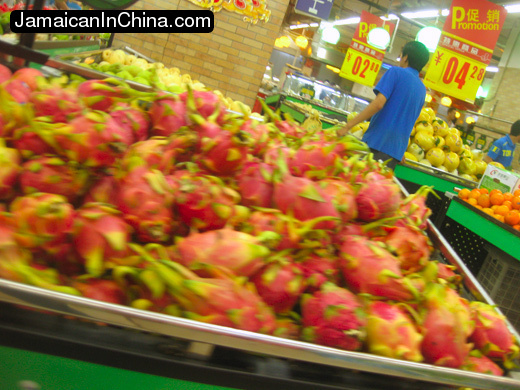 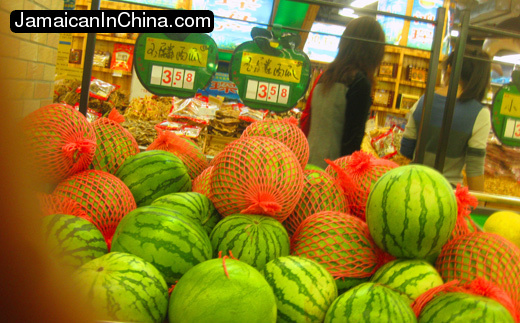 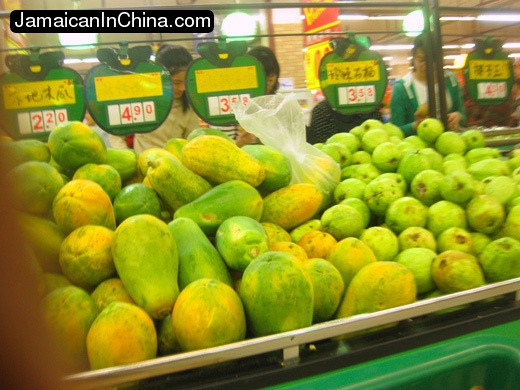 Most tourists, say an American (or a Jamaican who used to live in New York), thinks in terms of pounds. 1kg is actually 2 lbs, so when I see 2.20RMB, I think it’s 2.20RMB per pound, but it’s not. That’s confusing enough, but here’s where the trick comes in. The street vendors who sell produce use an entirely different system of computing prices. It’s called “free market, mood-based opportunity capitalism.” In other words, they charge by the pound, gram, kilogram, weather, nationality of the purchaser, color of your shirt, or day of the week, it really could be anything, depending on mood of the seller.

In 2009, when I visited China for the first time, I walked into a shop in Shanghai–within about an hour of landing at the airport–to buy a small 250ml bottle of water and asked the price.  Storekeeper told me 2RMB. Now I know enough to know it should be no more than 1RMB, or perhaps I was simply sensing intuitively that “the game” was on. I stepped out of the shop, called my translator in (at the time, I was traveling with Chun Yu Wang, author of Chicken Feathers and Garlic Skin,) and had her ask the price. She’s Chinese. Caught in the act, the owner shyly admitted to her it was 1.00RMB. We all laughed at his obvious, failed attempt to play and win the game.

On another day, in Wuxi, I walked into a store to get a bag of cashews (7.50 RMB) and a bag of dried fruit (12.00RMB) with prices plainly written on the items. The shop cashier/owner punched in the prices in a calculator (she didn’t use the scanner like she did the day before), turned the small screen toward me indicating that my bill was 30RMB. Ahem. Now, I may not speak Mandarin, lady, but I went to school to be a civil engineer. We covered basic addition. First day, even. Heck, I can even do that one in my head. I took the calculator, silently punched in the numbers myself, turned the small screen back toward her showing her I would be paying 19.50 RMB. She waved her hand in disdain, took the 20RMB bill, gave me my .50 RMB change–all this in a wordless exchange of calculator buttons, bills and screen displays.

You might have already read my tale of The Greedy Innkeeper In Xishuangbanna.

Here in Hainan, I went to buy some nesberries, (that’s what we call it in Jamaica) sapodilla in America. The street vendor put my three nesberries on the electronic scale, punched some mood-based numbers, and asked for 20RMB, I gave him 10RMB, he laughed. I took my fruit and walked out. Say it with me now, “Someone will pay it….it just won’t be me!”

Around the corner from the Lost Hostel here in Sanya, there’s a vendor selling fruit. Asking price for a small papaya? 20RMB. Now, I shop at the supermarket in the city centre, so I know that a small papaya costs about 5RMB. I laughed and walked away.

The next day, as I returned from shopping, I decided I wanted a mango. I knew about what it should cost from my supermarket shopping experience. So, I walked towards Mr. Papaya’s stand, and fortunately, at the same time, there was a Chinese woman also buying mangos. So, sensing my own opportunity, I pretended to browse a little longer, delaying my purchase, lingering for a bit to give the lady a chance to select her mangos and pay for them. Then, I watched the screen of the electronic scale carefully, and noted that Mr. Papaya punched in 17RMB/kg for her mangos. (A day or two before, he had entered 29 for my mangos.) So, now that he had her mangos on the scale and told her the price, I approached him at the scale. 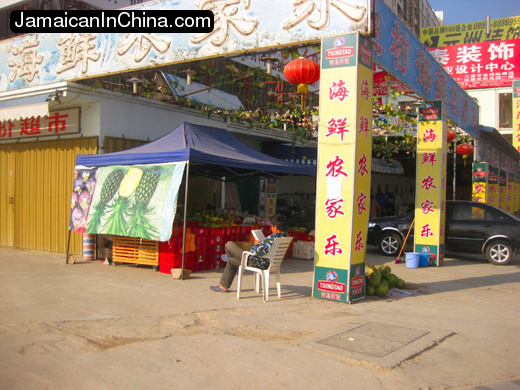 Would you buy a 20RMB papaya from this man? (Mr. Papaya)

I imagine that some people would have paid Mr. Papaya the 20RMB for various reasons:(1) to avoid a scene because they dislike confrontation, (2) Feeling ill-equipped to communicate effectively if there’s a language barrier, (3) It’s still cheap given the conversion rate to their native currency, and (4) perhaps other reasons I simply can’t relate to.  However, there’s just something in me that won’t allow me to willingly pay for something when I know the price is being inflated simply out of what I perceive to be opportunism based on a stereotype of the unaware, easily-manipulated, easy-target foreigner.


It’s a way of business I’ve seen in many places–different prices for different customers. It’s done in the tourism business on Saipan. It’s done in Laos, and everyone who travels has likely experienced it to some degree. Business is about seizing the opportunity to get the most you can get at any and every given moment. The cost is variable and based not on any pre-determined intrinsic or objective value, but the ability and willingness (unwitting or otherwise) of the consumer to pay.

Now, maybe I’m being too forgiving, but I’ m not mad at the people who practice “opportunity marketing.”  You know, In some ways, it’s no different from a hair stylist charging John Edwards $400 for a haircut. Yes, it’s a bit stressful for me, since I already hate shopping. But, I don’t want to impose an outsider’s standard of how business should be done. But, I’d like to hear what YOU think.

After he negotiated a good rate for my High Season Hainan Hotel room, my friend, Jian, emailed me the following:

“hey Walt,I read the news last night. People are complaining to the media that the whole tourist industry of Hainan is taking advantage of the Spring festival (Chinese New Year). The local Chinese government official commented: “This is normal.” (that is, no big deal. Don’t fuss.) Now you see why people say the Chinese capitalism is actually more real than the western one. 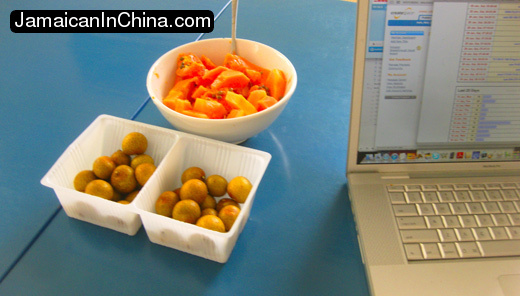 It occurs to me, as I enjoy my 5RMB supermarket-bought papaya here in Hainan, that my friend Jian is right! 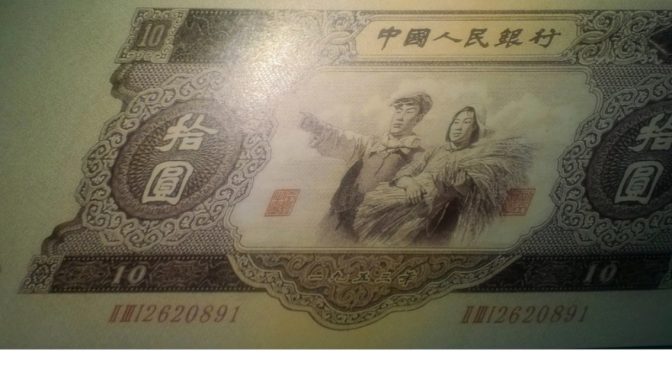 For those of you who think it’s expensive to do what I do, here’s a little info:

As I do my travels to various cities in China, I’m able to establish a routine, norms and requirements for my happiness and comfort. Depending upon how “furnished” my accommodations are, I may need to purchase a few items at each destination. At my first villa in Xishuangbanna I didn’t have to purchase much. However, the second place I stayed was an empty hotel room which the owner equipped with a single-burner stove, a small gas-tank to allow me to cook, so I had to buy everything else except toilet tissue.

Here’s what I ended up buying, and which now constitutes my standard shopping list for new nomad destinations.

See? It’s not that expensive at all–particularly if you’re on a US-based/derived income. Of course it helps if you’re low maintenance minimalist, willing to shop where the local people shop, but the fact is, your dollar can go much further in many destinations overseas.

– I get a mop and broom as I prefer to clean my own room (have you seen the mops and dirty bucket water in most hotels?)

– the “hooks” are a paste-on 5-hook thingy on which I can place utensils (spoon, strainer, etc.) that I use for cooking 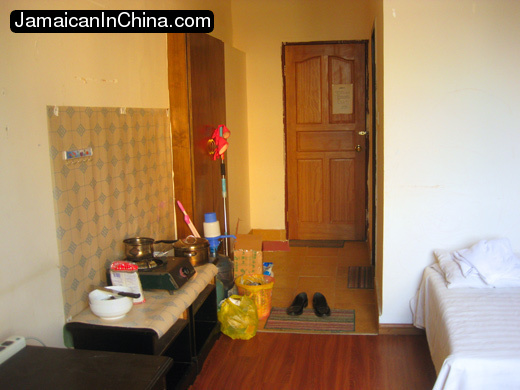 all the purchases in my Xishuangbanna mansion 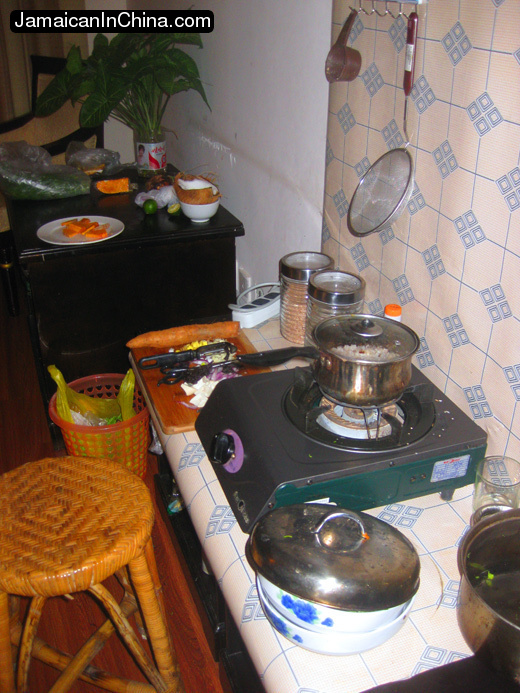 I’ll compare the above prices to those on Hainan in a future post (rumor has it things are much more expensive here)
So, my point is, when you think to yourself that traveling around the world is something you could never do, remember the dollar-a-day nomad and Jamaican in China!