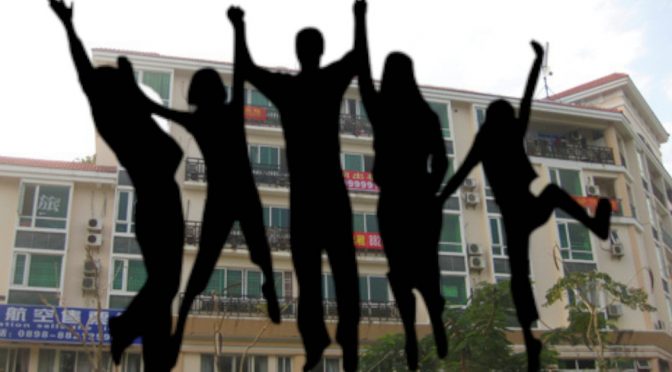 First of all, thank you for the support of all who emailed me about my last post. Apparently, my dramatic writing flair was better than I expected, or perhaps my friends are accustomed to the drama I often welcome into my life. In any event, to set things straight: I am not going to be homeless on Hainan! I repeat, I am not going to be homeless on Hainan! So Fret not thyself, and stop sending out thoughts of worry and despair–you’re killin’ my buzz! However, you can still send any money you’d like to send if it makes you feel better to do so.

Perhaps I forgot to mention that there are ALWAYS other options, and, while I said I’m not above sleeping on the beach, I’m also not above paying extra if it’s practical. There are no electrical outlets on the beach for my laptop.

So, let me tell you what happened!

In our last episode, I told you the tale of the Hainan heist, the hotel that charged me 60RMB/night and then proceeded to raise the price once I was there.

Well, To paraphrase Country singers Garth Brooks (as well as Mark Chestnutt for those who think I don’t know Country), I have friends in high places, low places, and other-worldly extra-dimensional spaces who keep me grounded, guided and gifted with great advice and support.

A good friend back in the states suggested that I have a Chinese friend check in with me, and tell them that they have to honor their contract with me, or otherwise they could lose their license. He suggested that I tell them I’ll call the police – since I have a receipt of sale to prove it.

My friend also thinks I didn’t take advantage of “Junior,” and I agree, since it’s unlikely that Mom and Dad would entrust that responsibility to him unless he knew how to handle it.

I also sent an email to some of my friends across China, and here are some of the responses I received. Essentially, my Chinese friends, agreed to seek a compromise.

“What I would do is tell them that you will take all evidence (receipts, anything they wrote, pictures of signs showing prices, etc.) and file a complaint to the Sanya Bureau of Business Administration （工商局） and Bureau of Tourism (旅游局), but at the same time trying to negotiate a price a bit higher than what promised by the “Junior” but lower than the market. I believe they will be happy to do so.

This is the Chinese way. Chinese people usually do not like to push things to the extreme (such as complaints or lawsuits). Instead, they are more willing to find the “middle” way both sides can accept. If you are willing to step back a little by accepting a higher price, it will be easier for them to offer you a price lower than market. If they do not, then they lose all cards, and they will be looked bad in the eyes of regulators if you do file a complaint.”

So, long story short, after much back and forth with my friends, I decided to do things “the Chinese way” and have
my friend, Jian, call the owner on my behalf.

Here were my terms: Having already agreed to pay 60RMB/night, I told him (to relay to her) that I would be willing to pay 90RMB or 100RMB. In other words, it would have to be LESS than the 150RMB/day that my “Plan B” hotel down the street was going to charge, and furthermore, it would have to be LESS than double the current price (2 x 60=120RMB), since 120RMB/day was what I was paying at the youth hostel for a room in a better neighborhood that included internet access.

Jian called her this morning, (new year’s eve) and without resorting to threatening to get the authorities involved, she agreed to 100RMB/day for a ten day stay. So, I’ll get through the high season on Hainan paying 100RMB/day which is still effectively less than the 116RMB/day that the 3,500RMB/MONTH apartment with the shared kitchen in the other side of town was asking.

I’m sure the owner is a bit happier.

As I told a Chinese friend, “…this is very different from the American way of ‘you’ve got the proof and the legal right, so sue ’em for all you can get!’

Me? Well, for various reasons, including the fact that I’m in China, (and since the owner has access to my room), I’m content with taking the middle ground.

Even though a few friends with US mindsets also chimed in that it IS about the principle, when you compare it all in US dollar terms, I’m still paying only $15US/night for a Hainan High Season Hotel! And I can relax a bit for the next 10 days and not have to worry about trudging through the streets of China with my suitcase and back-pack, as crowds look on and point….under the fireworks and moonlit night sky of New Year’s eve in China!

But, come February 11, the adventure shall continue!

p.s. Tonight, I’ll do something I don’t normally do. If you know me, I don’t typically buy into these “arbitrary lines” of this day or that day. However, tonight, as I spend New Year’s eve on the island of Hainan, People’s Republic of China, I shall head out into the maddening crowd and participate in the festivities! Stay tuned.

p.p.s. I have no internet access, but….the universe is perfect. In ten days I can accomplish quite a lot without the distraction of constantly checking website stats, and email!