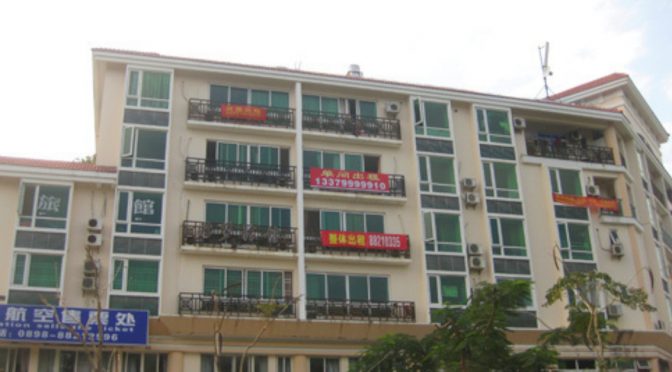 Here’s the deal. I’m in the city of Sanya, the southern part of Hainan, an island off the south coast of the People’s Republic of China. It’s a favorite tourist destination for many people, not just Chinese. It’s January 31, 2011. Chinese New Year is 3 days away on Feb 3rd. As a result, this is what’s called “the high season.” Yep, everyone’s high. There’s hysteria in the air. Not just the hysteria and excitement that comes with ringing in a new year, but the high that comes with the possibility of making a financial killing charging exorbitant prices on everything from food to hotel space. (Would you pay 20RMB for a papaya that should cost 5RMB? More on that later.)

Anyway, I’m currently staying at the Lost Youth Hostel. I’m currently paying 120RMB/night. It’s a nice place, friendly staff, piping hot water, and internet access. (No kitchen, but you know how I roll with the CPC!) I would stay here indefinitely, but on Feb 1st, I must leave because my room was booked in advance by others who planned to be here in Sanya with a bit more foresight than I had. 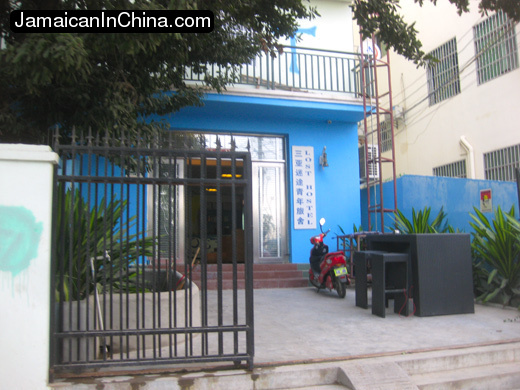 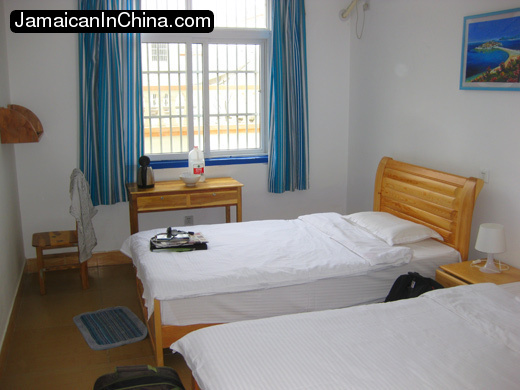 I also have to leave because on Feb 1, the rates go up from 120RMB/night (18US) to 450RMB/night (68US). That’s right, four times! Quadrupled! But, again, there are no rooms available anyway, even if I was desperate enough to pay that price.

So, soon to be homeless, I’ve been looking for a new place around the island. Here’s how it works. You walk around the neighborhood you’re interested in, look up at the buildings, and you’ll see typically huge orange banners with phone numbers on the balconies of specific apartments/rooms that are available for rent. They’re everywhere. You call the number, and…if you’re Chinese, you get one price. If you’re a foreigner, you get quoted another price. But, to be fair, while foreigners are, in fact, singled out to pay more (I hear the Swedes have it the worst), everyone, Chinese included, are paying “high season” prices to ring in the new year on Hainan. 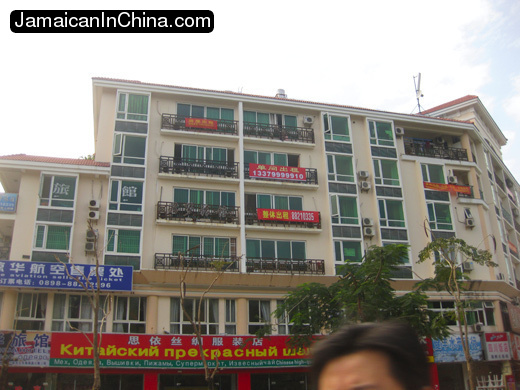 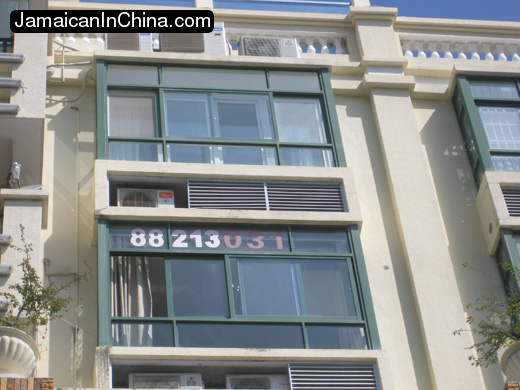 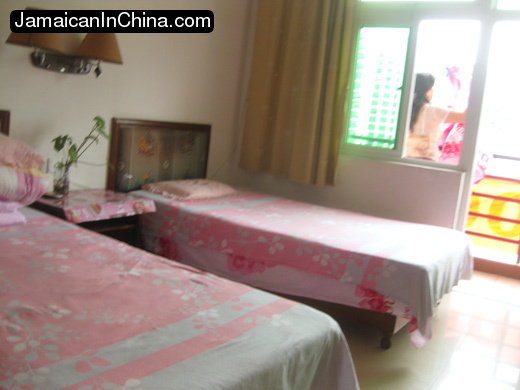 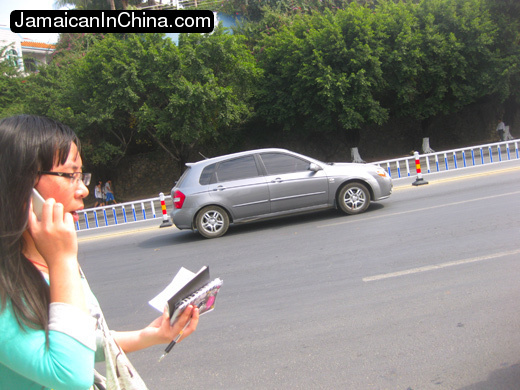 While on the bus on my way to check out the 3500RMB apartment, I met Wang, who was nice enough to call the landlord on my behalf, help me find the place, and help me gain entrance by communicating with the current tenants who were inside. Helpful Hainan!

The place that Wang helped me find was nice. The owner wanted 3500RMB/month (roughly 120RMB/day), and after checking it out, I was going to take it, but she wasn’t willing to bargain AT ALL. Neither would she let me pay for the first 10 days (rather than 30). You see, as nice as the place was, it didn’t have internet access, and I just didn’t see the point of committing to 30 days at 3,500RMB and still have to figure out how to get online (there’s no Starbucks, and I can’t use my laptop at internet cafes)

Modern, shared kitchen, refrigerator, 3500RMB/month, but won’t budge on the price or terms

The other reason I’m realizing I don’t want to commit to 30 days is this: In about 10 days, this will all be over. By about Feb 10, the festivities will be over, all the tourists will leave Hainan (except for a few stragglers like me), and prices will return to normal. Any deal I commit to now will be based on the high season prices. Why should I lock myself into paying 120RMB/day, for instance, and then continue to pay that rate once Feb 10 has passed? So, the new plan is, I’ll figure out a way to survive until Feb 10, and then I’ll approach some of the same owners anew to renegotiate based on the “not-so-high season” hysteria. 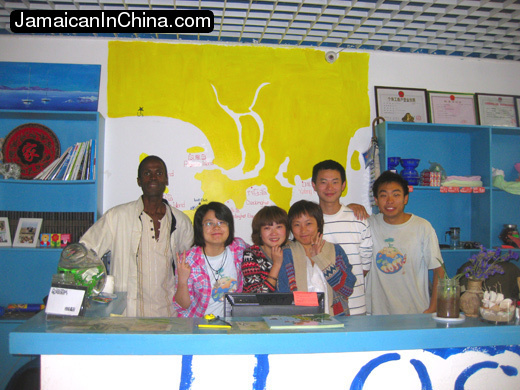 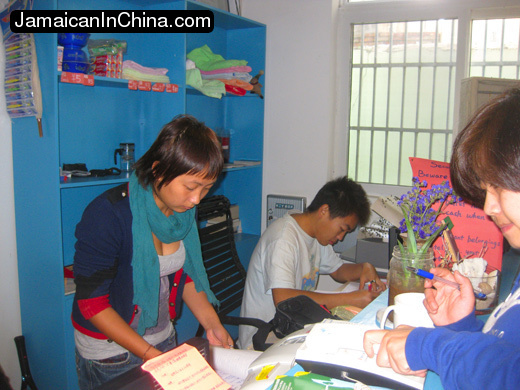 So, today I went back to a part of town where I had found a hotel at which I had been quoted 80RMB/night, and found out that they now wanted 200RMB/night! I walked out. Someone will pay it. 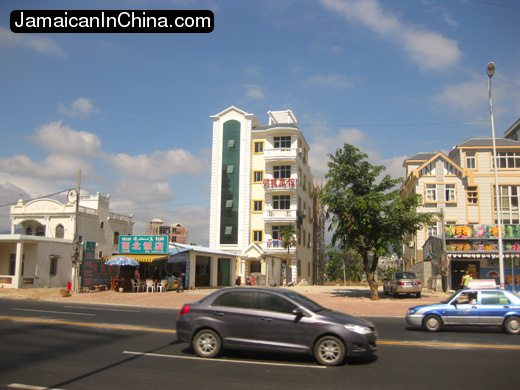 And then, it happened. A few hundred hards further down the street, I walked into a nice establishment, and there was a 15 year old kid at the desk! Jackpot! I knew what was about to happen. I mimed for him to show me a room. He did. I asked him the price. He said 60RMB/night. I tried to contain my excitement. He was a naive, wide-eyed kid, and I was likely the first Jamaican he had ever encountered (trust me, I can tell), and I knew for a fact he was quoting me the “Chinese price.” Given the rarity of seeing a foreigner hotel-searching in this part of town, Mom and dad likely hadn’t forced Junior to read the part of the training manual entitled “How to Make a Killing Selling to Foreigners.” I accepted, and paid for 7 days. 420RMB for 7 days. He gave me the key, and I told him I’d check in tomorrow. He didn’t ask for it, but I left him my cell phone number because, even though I now had my receipt and the key, I knew what would happen the moment I left and the boss (mom or dad) found out what he had done!

So, in anticipation of that phone call I knew I’d be getting, I stopped at another hotel and started some negotiations for a room there as my “Plan B.” After much sign language, Pidgin-Putonghua, and calls to the helpful staff at Lost Hostel, I find out why I was having such a difficult time getting the receptionist at this new hotel to give me a quote for a 7-day stay. Turns out, that she could give me a room for 150RMB for TONIGHT, BUT she didn’t know what the rate was going to be for TOMORROW. This is like the freakin’ stock market!! The boss gets up the next morning and lets her know what the rate for the day will be. So, conceivably, I could check in today at 150RMB, and then tomorrow, I could be told the rate is 200RMB (high season hysteria)

Sure enough, about an hour later, once I return to the Lost Hostel, I get that phone call. It’s from an adult at the hotel where the 15-year old rented me the room. Turns out that the price on Feb 3rd is going to go up to 200RMB. But, I will get Feb 1 and Feb 2 at 60RMB/night! What a steal! So, tomorrow, I check out of Lost Hostel, and check in to a great 60RMB/night room on HighNan…I mean Hainan! Stay tuned, I’m sure this story will get even better.

p.s. Now, I know what you’re thinking: I took advantage of a minor. Well, the way I see it, I took the opportunity to get the money in their hands. With a paid customer, this close to the new year, I figure they have two options. (1) They could give me back my money (possible, but unlikely, given that as I’ve learned, putting the money directly into the hands of someone you’re negotiating with is great leverage. (2) They could honor at least a part of the agreement that Junior made (which they now have done), and attempt to extort me for more money after the first 2 days is up (which they are already preparing me for).

I’m sure they feel THEY have some leverage once I move in. However, the way I see it, is that I’VE got more leverage cause I’m not afraid to move out and sleep on the beach if I have to to make a point.

Now, I know what ELSE you’re thinking: “Pay the &($&($ money, Walt, even at 200RMB it’s still $30US a night which is WAAAAAY less than you could get anywhere in the US or its territories!” True, but what you don’t understand is that I’m now Chinese, and I think in terms of RMB not USD, and as all cheap people are fond of saying, “It’s not about the money, it’s the principle!”