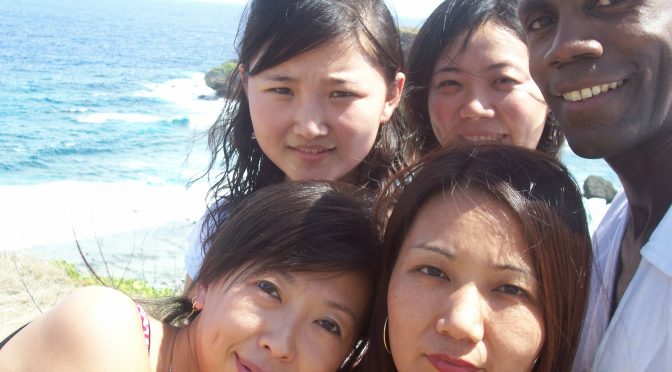 The Garment Factory Era on Saipan lasted from Oct 14, 1983 to Jan 15, 2009. It employed approximately 20,000 workers and brought in revenues of close to 1 billion dollars in taxes and fees.

I’m  about to upload a series of Youtube videos with some of my personal pics and videos of remembrances of what life was like on the island at that time–including times spent hanging out with the factory girls (and guys) from when I arrived on Saipan in 2006 to the last closure, and beyond!

And if you weren’t aware, I wrote a book about that era (Chicken Feathers & Garlic Skin: Diary of a Chinese Garment Factory Girl on Saipan with former factory worker, Chun Yu Wang)–that remains the only firsthand account of what life was like for factory workers during that time– and that has been used in three universities stateside in either “Textiles” or “Women’s Studies” courses, and has been excerpted in a French textbook in a section on “The American Dream,” and has over 160 reviews on Amazon!)

So, without further delay, here’s episode 1 of the “Remembering the Garment Factory Era” series:

Subscribe to the discoversaipan channel so you’ll be notified when the next in the series is released!