What do the free Summer concerts in New York City for 2011 have to do with me in China???

So, here I sit on a beach on a tropical island off the coast of The People’s Republic of China. Meanwhile, 8,361 miles (13,455k) away on another island in the United States of America, people are looking forward to what they’ll do for their 2011 summer in New York. I know this because one of my websites, www.FreeSummerConcerts.com has started to receive a marked increase in visits starting a few days ago.

Back in the summer of 2005, shortly before I left Harlem, New York, for Saipan, I started the site to provide a compilation of all the free music events throughout the five boroughs of New York City. The site was an instant success (“free” always works online), and as you can see from the tracker snapshot below, the interest and sign-ups begin as early as January each year even though the site won’t actually resume until the first day of Summer, June 21, 2011.

So, every summer, from wherever I happen to be (last year I was on Saipan), I research and compile the free music events throughout the city, and (1)post them to the website, (2) email them twice weekly to a mailing list of tens of thousands. The site generates money if/when visitors click on the Google ads on the site.

I promote the site thusly:

Every summer, New York’s parks, piers, plazas and pathways host some of best musical entertainment in the world! From Rock, Reggae, Jazz, European Classical, R&B, Electronic, Hip Hop, Country, Salsa, Folk and more– it’s all absolutely free! Wouldn’t it be convenient to know what’s going on and when so you don’t miss out? Let FreeSummerConcerts.com notify you by email of practically every morning-time, lunch hour, after work and weekend concert well in advance to make your plans!

Here’s what happened over the past 20 days 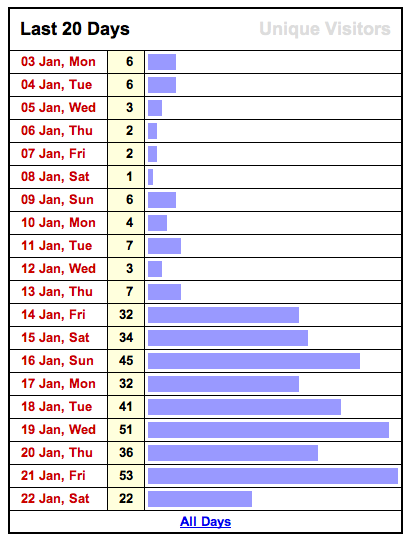 Here is what happened over the past 20 weeks. 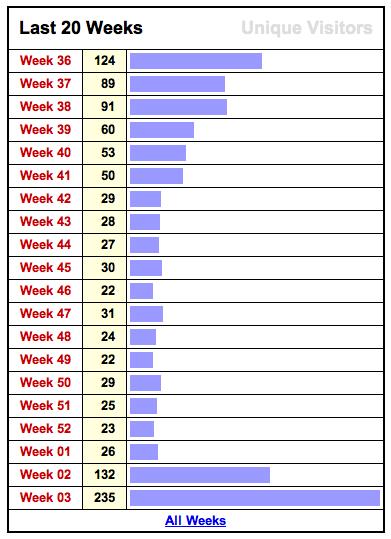 And what happened over the past 20 months. 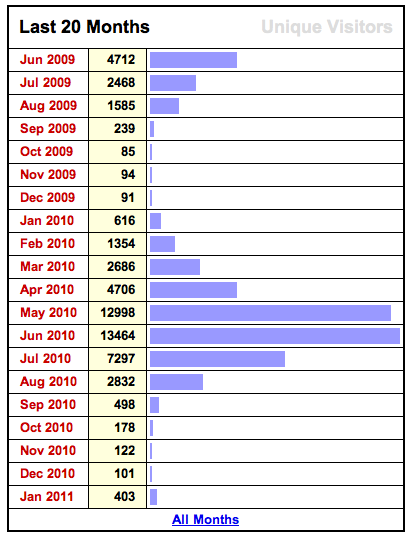 I find these tracker details fascinating. have no idea what happened on January 14 to have visits jump from a daily average of about 5 or 6, to suddenly 32. Then, once the tipping point occurs, it continues and grows.

Just another secret lesson in “Nomadpreneuring 101!” From The Jamaican on the island of Hainan, China, to you wherever you are!

shhhh….Secret behind the Secret: This particular post also serves as a promotional tool. Once the search engines record this post, it will show up in people’s google alerts, and also higher in the google listings for searches.

You can check out the ever-changing stats of my site yourself by visiting the site, scrolling all the way down and clicking on this little icon: