[Sorry, no pretty pictures in this one!] In preparation for an upcoming trip, I decided at the last minute to do a water fast. I stopped eating solid food on Thursday at 5pm, so now, I’m in the middle of DAY 8 of eating nothing solid, and consuming only water and lemonade for the past 8 days. I’ve also been using an ionic foot bath in order to do a full ion cleanse detoxification, which gets rid of the toxins that have built up in your bloodstream. I must admit I’m feeling much better already.

I’m doing the Master Cleanse, which you can read about here, which is part of my Yesterday’s You! How to Reverse Aging, protocol. It’s now 3:20am on Friday morning, I had planned to officially end the fast yesterday at 5pm which would have concluded 7 full days. However, still feeling great and starting to notice some of the STAGE 3 changes described below, so I might continue! I was ALSO going to share my fasting log of how each day was proceeding, but perhaps I’ll link to that later. Meanwhile, for those of you who may be considering fasting for health, detoxing and rejuvenation, here are the Stages of Fasting from a post on Curezone.com.
(And, very important, the protocol I’ll be following to BREAK the fast is here:
https://mastercleansesecrets.com/blog/after-the-master-cleanse/what-to-do-after-the-master-cleanse/105/)

Stage 1 (Day1-2)
On the first day of fasting, the blood sugar level drops below 70mg/dl. To restore the blood to the normal glucose level, liver glycogen is converted to glucose and released into the blood. This reserve is enough for a half day. The body then reduces the basal metabolic rate (BMR). The rate of internal chemical activity in resting tissue is lowered to conserve energy. The heart slows and blood pressure is reduced. Glycogen s pulled from the muscle causing some weakness. The first wave of cleansing is usually the worst.Headaches, dizziness, nausea, bad breath, glazed eyes and a heavily coated tongue are signs of the first stage of cleansing. Hunger can be the most intense in this period.

Stage 2 (Day 3 to 7)
Fats, composed of transformed fatty acids, are broken down to release glycerol from the gliceride molecules and are converted to glucose. The skin may become oily as rancid oils are purged from the body. People with problem-free skin may have a few days of pimples or even a boil. A pallid complexion is also a sign of waste in the blood. Ketones are formed by the incomplete oxidation of fats. It is suspected that the ketones in the blood suppress the appetite by affecting the food-satiety center in the hypothalamus called the appestat. You may feel hungry for the first few days of the fast. This effect is temporary. The desire to eat will disappear. Lack of hunger may last 40-60 days.
The body embraces the fast and the digestive system is able to take a much-needed rest, focusing all of its energies on cleansing organs and the lungs are in the process of being repaired. Periodically, the lymphatic system expels mucoid matter through the nose or throat. The volume excreted of this yellow-colored mucus can be shocking. The sinuses go through periods of being clogged, then will totally clear. The breath is still foul and the tongue coated. Within the intestine, the colon is being repaired and impacted feces on the intestinal wall start to loosen and are autolyzed.

Stage 3 (Day 8 to 15)
On the latter part of an extended fast, you can experience enhanced energy, clear-mindedness and feel better than you have felt since childhood, On the downside, old injuries may become irritated and painful. This is a result of the body’s increased ability to heal during fasting. If you had broken your arm 10 yrs before, there is scar tissue around the break. At the time of the break, the body’s ability to heal was directly related to lifestyle. If you lived on a junk food diet, the body’s natural ability to heal was diminished.
During fasting, the body’s healing process is at optimum efficiency. As the body scours for dead or damaged tissue, the lymphocytes enter the older-damaged tissue secreting substances to dissolve the damaged cells. These substances irritate the nerves in the surrounding region and cause a reoccurrence of aches from previously injured areas that may have disappeared years earlier. The pain lasts as the body is completing the healing process. The muscles may become tight and sore due to toxin irritation. The legs can be the worst affected as toxins accumulate in the legs. Cankers are common in this stage due to the excessive bacteria in the mouth.

Stage 4 (Day 16 to 30)
The body is completely adapted to the fasting process. There is more energy and clarity of mind. Cleansing periods can be short with many days of feeling good in between. There are days when the tongue is pink and the breath is fresh. The healing work of the organs is being completed. After the detoxification mechanisms have removed the causative agent or renders it harmless; the body works at maximum capacity in tissue proliferation to replace damaged tissue. While a short fast will reduce the symptoms, a longer fast can completely heal. Homeostatic balance is at optimum levels. The lymphatic system is clean except for a rare discharge of mucus through the nose or throat. After day 20, the mind is affected with heightened clarity and emotional balance. Memory and concentration improve.

Stage 5(Day 30 to ?)
(Breaking the Fast with the genuine return of Natural Hunger) Shelton.
The Breath, which during all or most of the fast has been offensive, becomes sweet and clean.
The Tongue becomes clean. The thick coating which remained on it throughout most of the fast vanishes.
The Temperature, which may have been sub-normal or above normal, returns to exactly normal, where it remains.
The Pulse becomes normal in time and rhythm.
The Skin reactions and other reactions become normal.
The Bad Taste in the mouth ceases.
Salivary Secretion becomes normal.
The Eyes become bright and eye sight improves.
The Excreta loses its odor. The Urine becomes light.

The primary indication that the fast is to be broken is the return of hunger; all the other indications are secondary. Often one or more of these secondary signs are absent when hunger returns, but one should not refrain from breaking the fast when there is an unmistakable demand for food, merely because the tongue, for example, is not clean. Inasmuch as all the signs do not inva
riably appear in each case, do not hesitate to break the fast when hunger returns.

Have fun!
Okay, okay! Since you asked, and since this IS Saipan, after all! Here’s a pretty picture of how I spend my days while fasting. 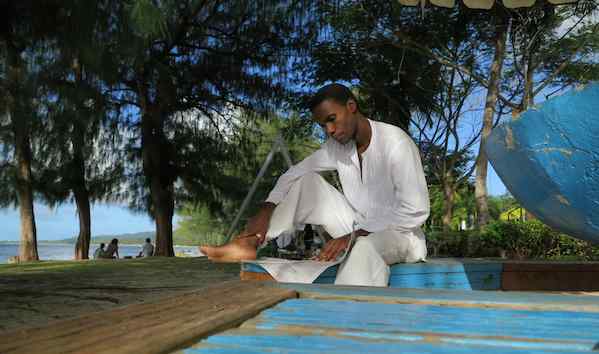