Things have been moving fast, but before we go any further, I’d like to express my sincere thanks to some Beijing friends I made during my two months there:

– To Susan, my couchsurfing guide, who helped find one of the cheapest hotels in Beijing and has a book’s worth of money-saving tips for anyone living and visiting the city! Thank you!

– To Shang Mei, one of the first people I met outside the Apple Store, who was just so sweet and friendly and who helped me look for apartments in Sanlitun. Thank you!

– And, thanks to Ben, whose Chinese language skills I envy, and whose insights into the Chinese female mind made for great conversation…(oops, sorry, Ben, was I not supposed to say that in public?)

Now, those of you who know me know that, for healthy lifestyle reasons, I NEVER use air conditioners. The air is unnatural and often toxic, and I love heat! I’ve lived in Jamaica in the tropics, New York during hot summers, and Saipan for four years, and never used one. I mean never. So much so, in fact, that I didn’t know you could get warm air from an air conditioner until Cong told me during my last days in Beijing!

However, since I’m told that the heat in China doesn’t get turned on until November 15, I had to make an exception and use one to blow warm air into my room!

So, once I arrived in Kunming, and once I realized it was still a bit too cool for me here, and once I discovered that the hotel I was staying didn’t have an air conditioner for me to use to warm the place, I switched after one day to another hotel (thanks, again to Cong!)

This one was called the Dock Inns–a set of modified studio apartments on several floors of an apartment complex a bit outside of the city center. The daily charge was only 129RMB. 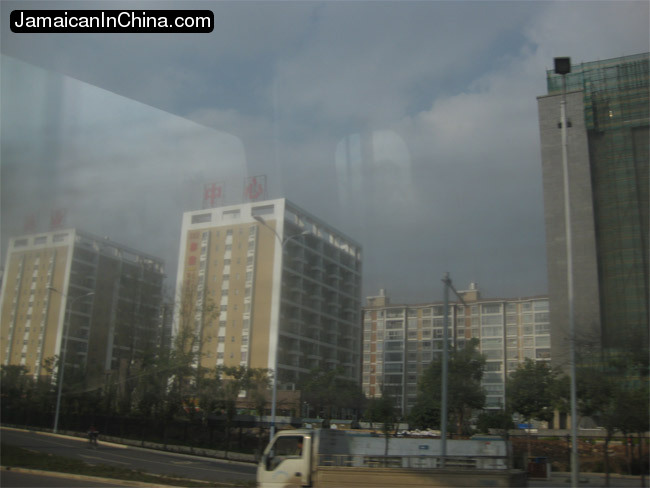 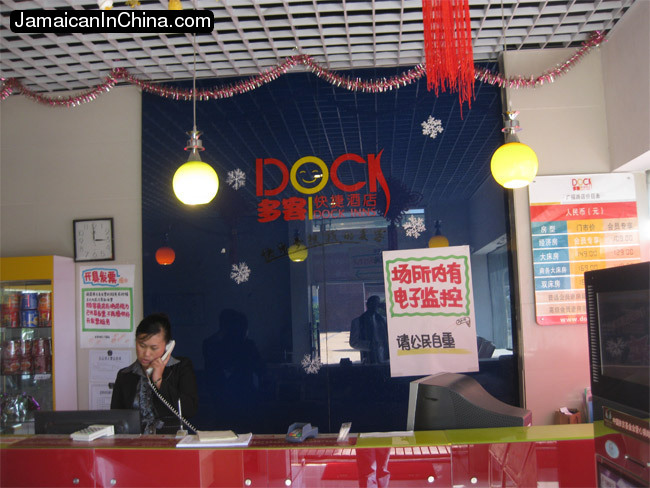 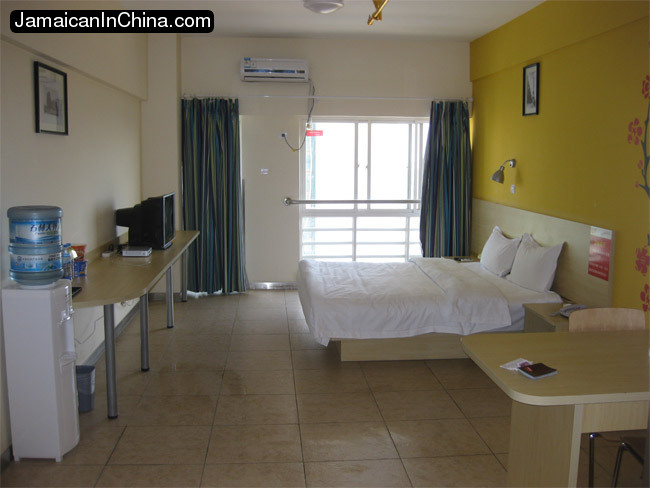 Great room, nice view, and an air conditioner for warmth. 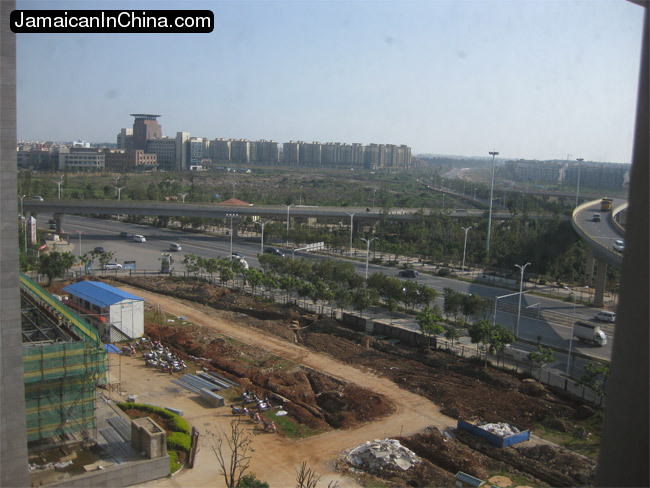 The view from my window

So, things are improving. I’m starting to feel more alive. There’s sunshine streaming through my window. That can only mean one thing: Time to eat!

I knew I was in the right place, when shortly after I entered, a troop of Buddhist monks entered and went upstairs to the special dining room. 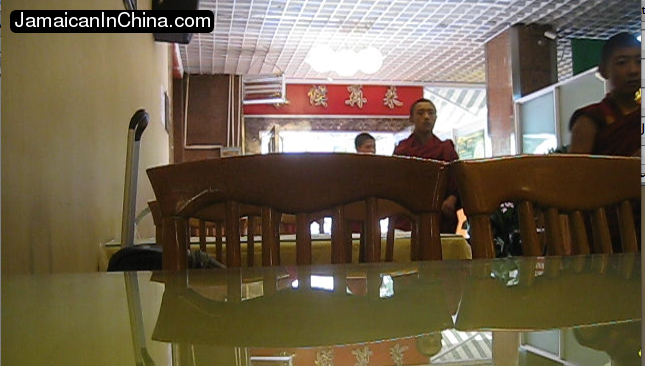 Okay….play it cool…try not to be too obvious that you’re taking their photo. Keep the camera on the table. 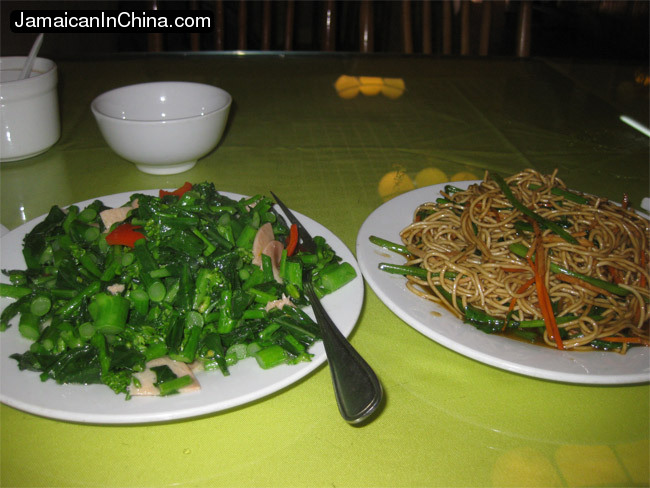 No chopsticks, you ask? I told you, when I’m really hungry, I go with the fork. I can get more in my mouth that way! 🙂

However, even though I’d visited it on two occasions, Yu Quan restaurant was an expensive 30RMB taxi ride from my hotel. However, Su Qun (aka Michael), the manager of the hotel, was nice enough to drive me there for my third visit, while showing me the bus route I’d need to take to get there on my own in the future. 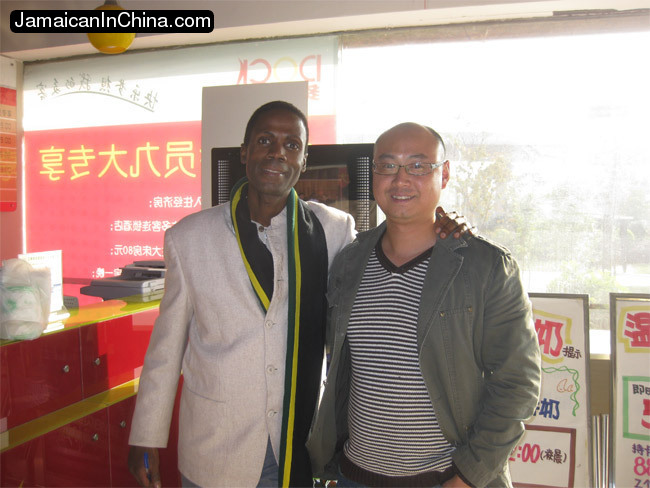 Su Qun (aka Michael), manager of the Dock Inns. (Lest you think I only meet and take photos with women here in China) Please note the colors of my scarf–the colors of the Jamaican flag–as there will be the customary test for extra credit.

So, yeah. Kunming is pretty cool, but it tuns out, as I said, it isn’t as warm–temperature-wise– as I thought it would be. When I chose Kunming as a place to run to escape the cold of Beijing, what I failed to include in my calculations was the elevation of the city. If I had paid more attention in geography class, I would have recalled that it’s not just the latitude that determines the climate of a region. The higher a spot is, the further from the warmth of the earth, and thus the cooler it is. Why didn’t anyone remind me????

So, just for your edification, perhaps, and for mine, I’ll share what I discovered. Here are a few elevations and latitudes of some relevant cities for comparison. (higher elevation means higher up; lower Latitude number means further south)