So, the other morning, I’m running bare-chested on the beach in Dadonghai, and, for some reason, people are staring at me. I’m really not sure why. Was it my slim, svelt, sexy physique? Was it the fact that no one else does this strange jogging thing in China except a few crazy Americans rarely spotted this far from the mainland? Was it the fact that I’m Jamaican? Was it the fact that I was the only one half-naked at this time of day (There’s a nude section of the beach, but those guys don’t come out until after sunrise). Well, I can’t be sure, but at least a few Chinese tourists thought it warranted taking a photo to document and share the strange things that happen on Hainan.

After my jog, I approached one of the paparazzi, and mimed and signed and pidgin Putonghua’ed a request while handing him my email address. Seems I was successful in my communication, since I just got an email containing this! 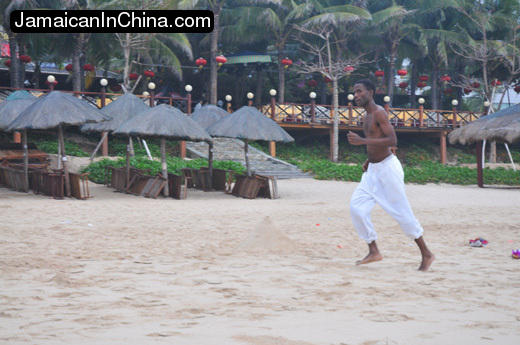 The subject line was 沙滩慢跑, which translates to “beach jogging.” Thanks, stranger!

One thought on “Nǐ kàn shénme? (translation: Whatyou lookin’ at??)”