When I was growing up in New York, I used to watch Mutual of Omaha’s Wild Kingdom on television every Sunday. (I’m dating myself, I know). Like many children, I was fascinated by animals. So, these days, while I’m not much into paying to see man-made structures and gardens as a tourist adventure, I WILL go see some wild animals if I get the opportunity! And, I’ve heard that Xishuangbanna is famous for its wild elephant sanctuary!

So, off I went! It’s a 50-minute bus ride from Jinghong City–where I’m staying–to the Elephant spot. 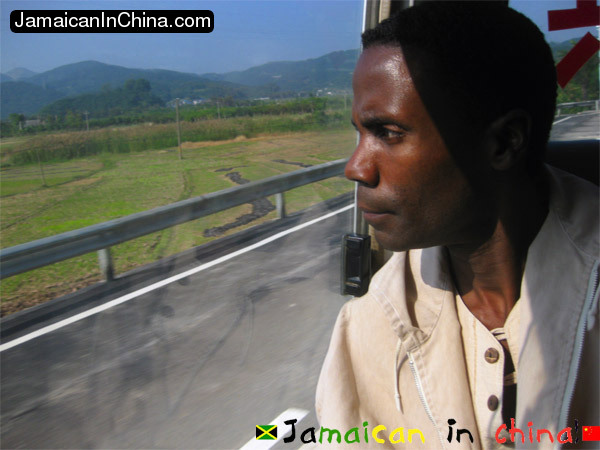 My first real touristy outing in Xishuangbanna. Look at the mountains! Breathe in that fresh air! It’s so exciting. Isn’t it, guys? Um, guys? 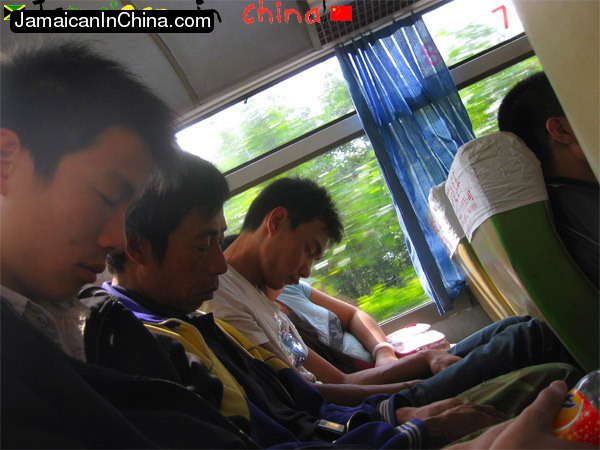 What the…? Hey, you guys! Wake up! You’re missing all the great scenery zipping by! 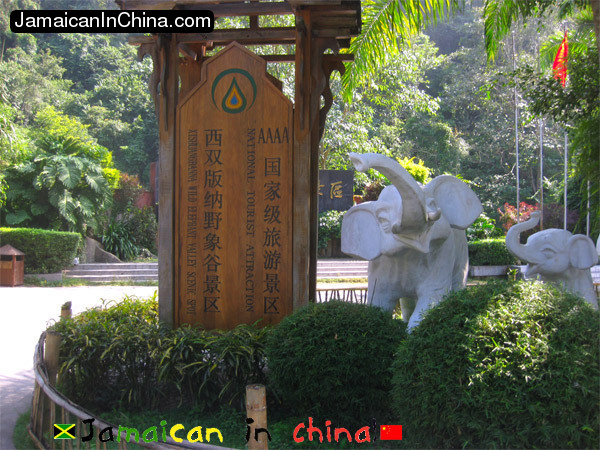 Elephants at the gate! Dwellers at the threshold

Well, we got to the spot. I think I was the only one on the bus who got off. Everyone else was on their way elsewhere. I paid my admission fee and joined the throngs of people heading to the see the elephants. In the middle of the compound there were elephants tethered to posts for photo opportunities. 20 yuan to have a photo taken. I was sort of expecting to trek through dense forest, on hidden pathways to sneak glimpses of rare elephants in their natural habitat while a seasoned wild elephant expert (the Marlin Perkins of Jinghong) engages us (albeit in Chinese) to help us understand all the mystery of these amazing creatures.

It’s possible I might have missed that part it since I can’t read the signs and opted not to take the Chinese-language guided tour. 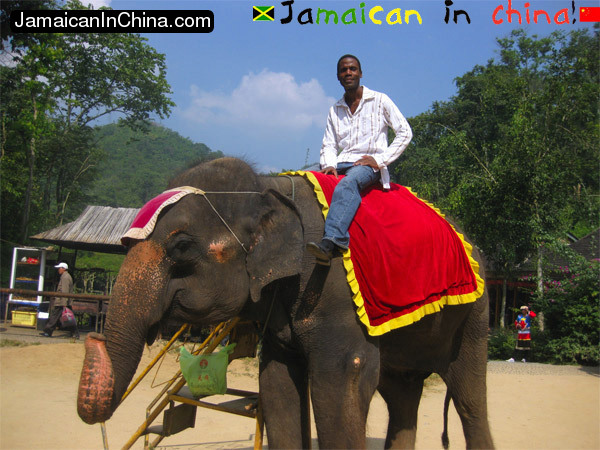 Not quite “in the wild,” but, I can now say I rode on an elephant. Hope I’m not too heavy for you, big fella.

DISCLAIMER: On a very serious note, it’s important for me to say here that I don’t condone keeping wild animals in captivity. Mankind commits many thoughtless acts and atrocities against sentient beings in the name of food, entertainment, clothing and ultimately, financial reward. For a very revealing documentary on many aspects of this, see EarthLings The Movie (also viewable on youtube or other sites.)

And then, the usual fun started. As I made my away around the compound, I started to get requests from people who wanted to take photos with me.

Sometimes, if they’re too shy to ask me to take a photo with them, what the girls will do is: one will pose for the camera while I’m approaching, and the other will snap a photo just as I walk by in the frame. I’ve seen this strategy a few times, so I decided to be nice(r) this time, and just walk deliberately into the shot and put my arm around friend #1. Upon seeing this, friend number 2 gave the camera to a passer-by and joined us in the shot! 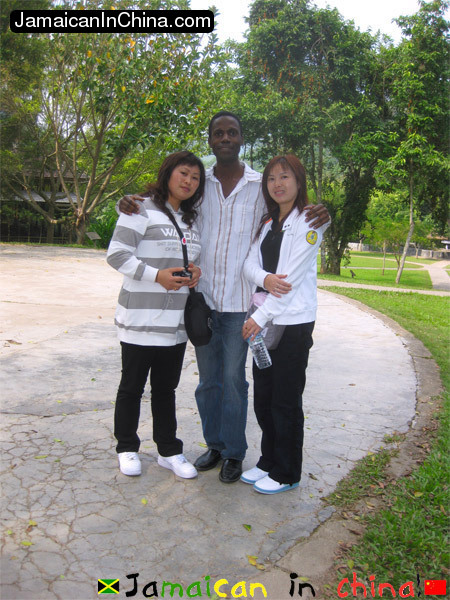 Upon seeing THIS, a monk gave HIS camera to someone else and joined me in a shot of his own! All this is done with just smiles and gestures. No words. 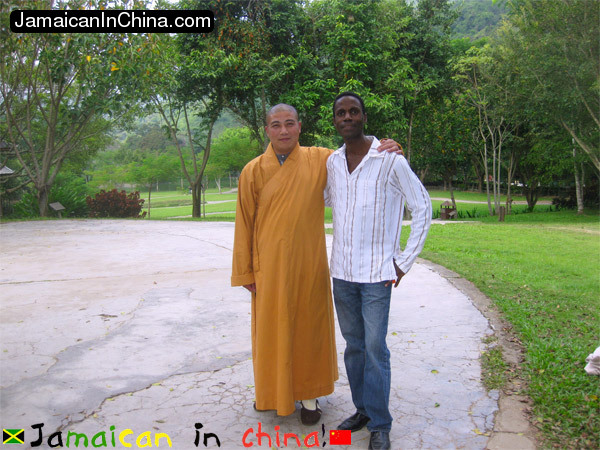 (I now make it a point to give MY camera to whoever is taking photos of me, so I can get a copy, too, ’cause you wouldn’t believe me if I simply told you what happens!)

If I stayed there any longer, a line would have formed. Yes! Can you see it?! A booth! A sign! I’m charging 10 yuan a head!

“Step right up! Young and old! Come take your photo with the Jamaican in China! Only 10 yuan!”

I felt bad for the elephants.

So, anyway, after fulfilling my obligatory quota of daily shots for strangers, I decided to stroll around the grounds and get some shots of my own… 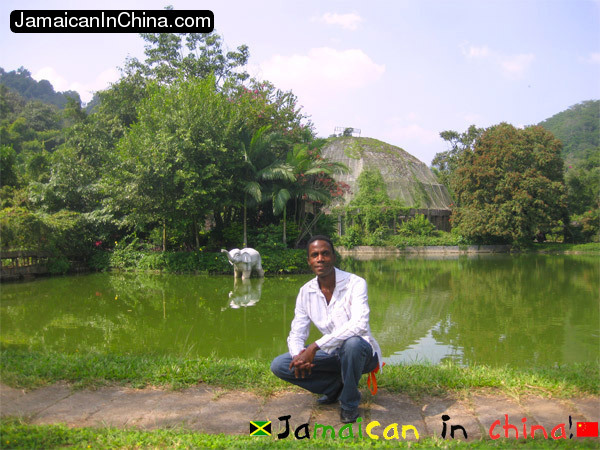 Jamaican in China. “Up in the hills, somewhere…” (photo by Parasol Girl) 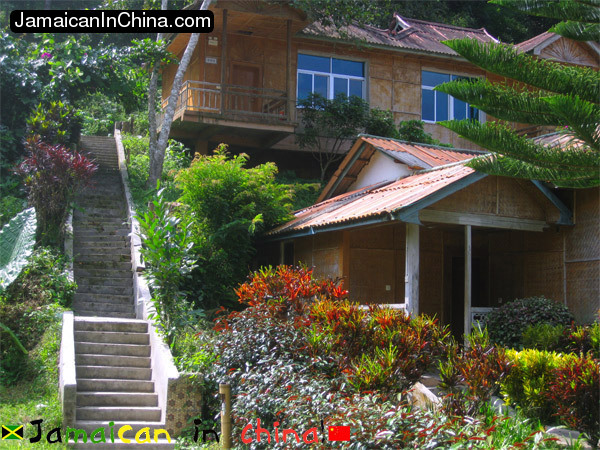 I think this is a guest house on the premises. Now THIS would be a cool place to live..if it wasn’t for the smell of elephant dung wafting through the kitchen every so often.

Then, I got down to business. 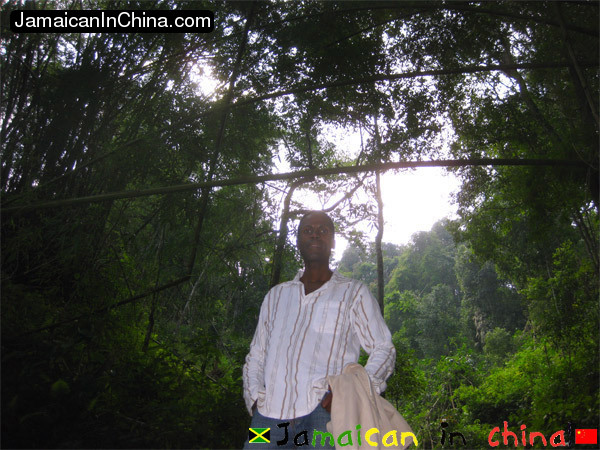 I started trekking through the dense forest, and on hidden pathways to sneak glimpses of rare elegance in its natural habitat, and like a seasoned expert (Call me Marlin Perkins), I engaged them (albeit, in the little Chinese I know) to help me discover all the mystery of these lovely creatures. Fortunately, I was able to grab some great shots! Wanna see ’em? 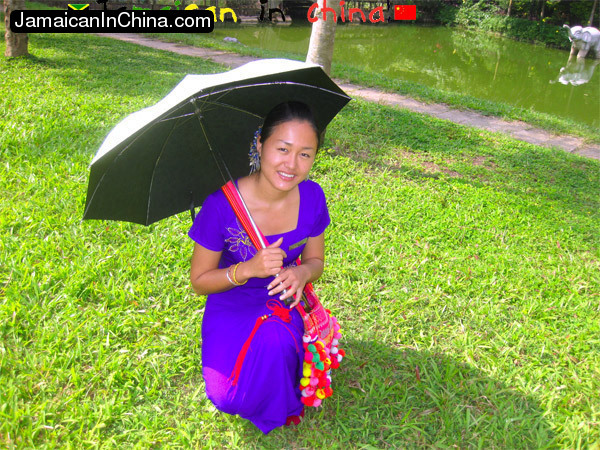 Not sure exactly what her job was, but she was simply out standing in a field (get it?) (literally) with her parasol, so I asked her if I could take her photo. Perhaps her job is simply to look elegant so that intrigued Jamaicans will ask to take her photo. Well, it worked. 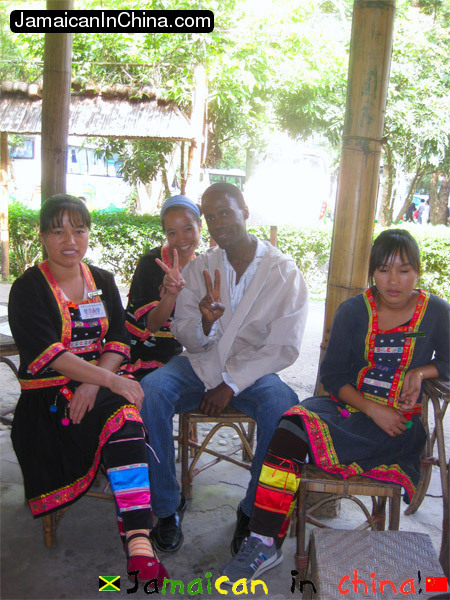 The Massage Girls and me…. 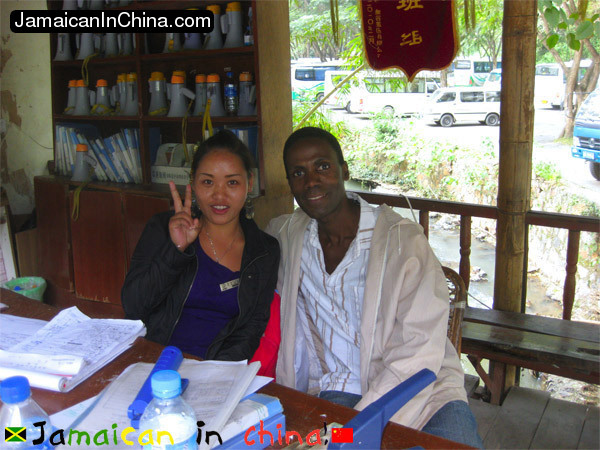 Zhang Li, at the front gate. She organizes the guided tours

Yes, it was a great experience. And, after a few hours out, I headed back home.

Not bad for a day’s outing, some cool memories and photos, and a bunch of QQ numbers.

Did you just ask me, “What’s a QQ number??”?? Come on now, get with the program, will you! Here in China, the second most asked question I get after “Where are you from?” is “You have QQ?”

Practically everyone in China has a QQ number.

You can’t be officially Chinese without QQ. So, now I’m on QQ. So now it’s official.

I may not be able to SPEAK fluently in Putonghua YET, but, with the help of the “Google translate” software, I can now CHAT in Chinese with all my new friends via QQ. I won’t publish my QQ number here. Things could get out of hand.