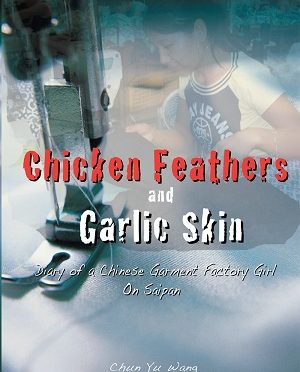 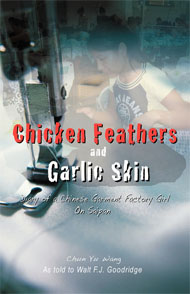 [Encouragement for self-published authors] While I was in China, I was contacted by Editions Bordas, a French textbook publisher requesting the rights to publish an extract of Chicken Feathers and Garlic Skin: Diary of a Chinese Garment Factory Girl on Saipan, a book I co-authored with former factory worker, Chun  Yu Wang, and that I published independently. (Order on Amazon)

An excerpt of the request letter reads: “We are currently preparing a school book entitled Missions 1re Lycée (code 732771) which will be published in paper form in April 2011 and designed for 16-17 years old pupils….

We would like to obtain your permission to use and reproduce an excerpt taken from Chicken Feathers and Garlic Skin: Diary of a Chinese Garment Factory Girl on Saipan by Chun Yu Wang (Please see below) in this textbook in all formats and for all countries…..this extract will be used for our school book by students who are studying the English language….We would be most grateful if you would grant us this permission for the period of exploitation of the textbook…. Please note that the excerpt will be used for pedagogical purposes by teachers and students in the French education system.”

We corresponded and negotiated the licensing fee via email, I provided the requested information, and now, after much anticipation, the book is finally available! Here are some images showing how the excerpt is being used. Click on image to view enlarged

The topic of the lesson is understanding the “American Dream.” Here is the single page featuring the excerpt: 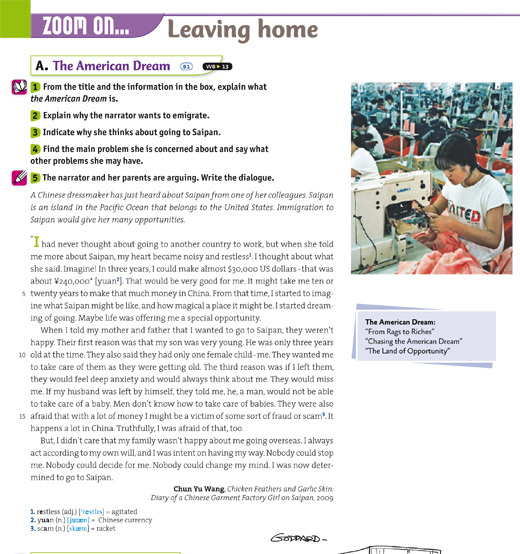 In the phraseology of mentor of mine, “I share this not to IMPRESS you, but to IMPRESS UPON you…” just what is achievable even as a self-published author!

My friend, Tony Cordoza, is a genius! Here’s how I know.

A few weeks ago, I announced the completion of two books I had started to write while in Hainan, China. As a result of the email to a few subscribers, I made a few advanced sales of the The Coffeepot Cookbook, as well as Living True To Your Self.  However, I hadn’t yet gone forward with the actual printing of Living True because I still wasn’t 100% happy with the cover image for the book.

Over the years, as a result of (1) being a “control freak,” (2) working under impractical, self-imposed deadlines (“I need it yesterday!”), (3) being prone to making many last-minute changes, (4) being convinced of my own artistic superiority, and (5) congenital frugality (read: cheapness), I’ve always found it easier to design my own covers.

For Living True, I had gone through about 5 different ideas for the cover (each having been posted on the www.livingtruetoyourself.com site). So, after my 5th attempt, I sought the input of my photographer friend, Tony Cordoza. 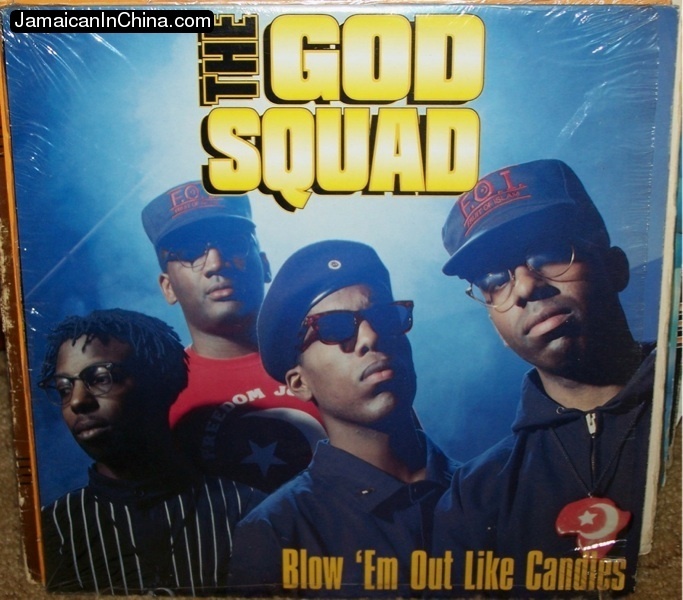 Now, Tony and I go a long way back. He’s taken all of the headshots I’ve used on my websites, books, columns and for my media kits. He took the photos for the covers of the records for the groups I marketed during my record label days, and I have, in fact, used his still shots and conceptual designs for a few of my previous books.Image: The God Squad: Blow ’em Out Like Candles…back in the day! 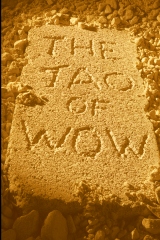 He’s an artist who goes to great lengths to get things perfect. I remember going shopping late at night at a construction supplies outlet a few years back to get a brick which Tony then painstakingly chiseled for hours by hand (while I watched, with pina colada in my hand), lit expertly in his studio, and then shot for the amazing cover of my book, The Tao of Wow. Now, there’s a true Wow Master!

So, Tony sent me a few conceptual images he had laying around, and I picked the one that “spoke” to me and created a cover. I liked it, but, couldn’t decide whether to use it, or stick to something a little more literal. Even until just 2 days ago, based on some feedback I had gotten from a few friends, I had decided to go with a “rocks on the beach” shot of me I took recently. I wrote to Tony and told him of my decision even though I really liked his concept. He replied:

“I get what you are saying, but remember you started the conversation with the words you want people to think outside the box. The shot of the rocks, sea and sky is very pedestrian, expected, uninspired, ordinary, run-of-the-mill, mundane, vanilla, should I go-on.:-)  I am not just saying that because it is my image.  Forget what other people say and make the decision based on what the image does for you and what you see in it. The image with the boxes is very conceptual and thought provoking. If I saw that beach scene cover on a bookstore shelf, I would never give it a second look.” [that’s the sort of valuable, professional advice you pay thousands for!]

So, taking the advice of an internationally famous photographer whose work has appeared on magazine covers, books, ad campaigns, etc. I went with it.  So…

At 9:30am, I uploaded the files to my createspace account.

At 10:00am I uploaded the new image to the livingtruetoyourself.com website,

At 4:00pm, createspace responded that the  files were ready for proofing.

By 5:00pm I approved the files for publication.

12 hours later, at 5:00am, the next day, I woke to find that a sale had come through the website!

In other words, in less than 24 hours from the moment I chose Tony’s image, it generated income.

As I wrote in an email to Tony a few minutes later:

The book wasn’t being actively promoted as yet, so the visits to the site have been “onesies and twosies” with no sales. However, I uploaded the graphic just a few hours ago, and the very next person who visited the site made a purchase. Since the various previous (my own) cover images were up on the site for many weeks without a sale, I myself attribute this “out of the blue” sale to the new cover! THANKS, boy Genius!! –W

Now, perhaps there’s no way to really know if that particular sale would have come through with the beach scene cover instead of Tony’s image. Perhaps my sales copy on the site would have been compelling enough to do it, but Tony’s statement about not giving the cover a second look if it were on a shelf is what pushed me over the edge. I realized he was right! I had been too focused on creating a cover that Walt Goodridge liked, rather than one that was compelling. When I looked at it from the point of view of a neutral observer, I found myself wanting to get in closer to see what the cover and the book was all about.

So, my point is this: when I tell you that I know a great photographer you should use, it’s not just because he’s my friend. Visit www.tonycordoza.com

What’s that? Oh, you want to see Tony’s image that I’m using for the book? Well, you’ll have to visit www.livingtruetoyourself.com to see for yourself!
And while you’re there, please share your opinions and take the Living True Survey Before (and after) ordering (Also available on Amazon!) 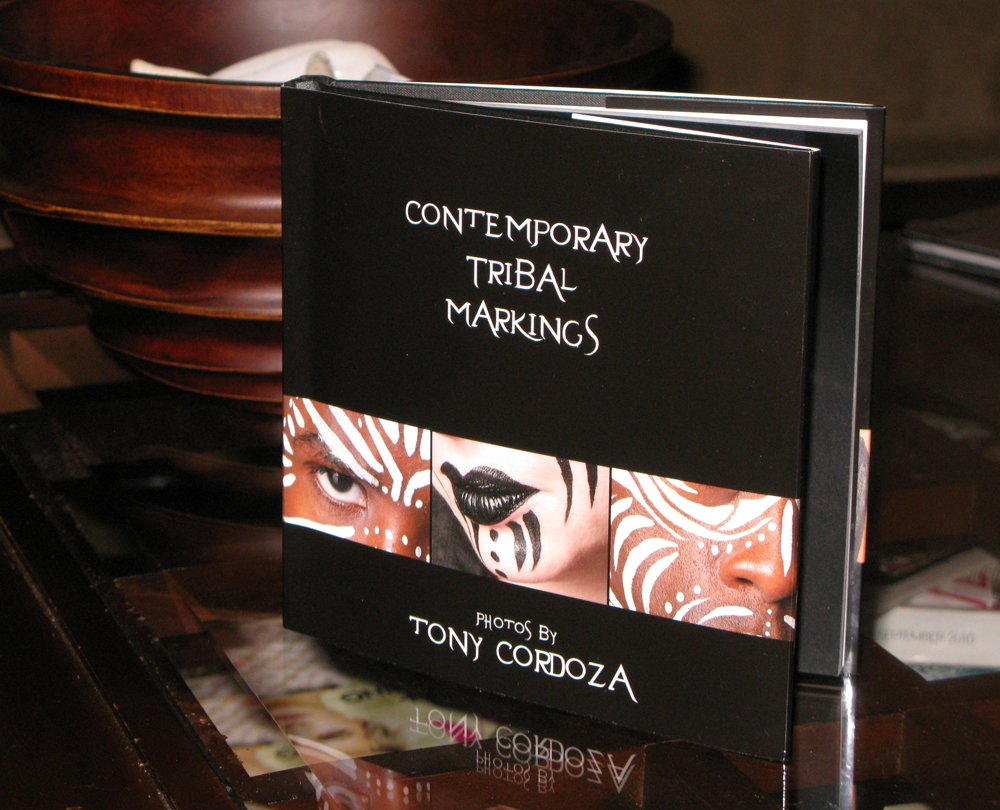 Just finished reading Money and the Law of Attraction: Learning to Attract Wealth, Health and Happiness by Esther and Jerry Hicks. Just thought I’d share a life rhyme I wrote that was inspired by the following concept in the book: 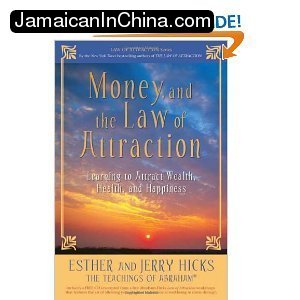 “In the same way that you understand that you do not have to attempt the impossible task of drawing enough air into your lungs to last all day or all week or all year–but instead you easily breathe in and out, always receiving what you want or need whenever you want or need it–money can flow in and out of your experience with the same ease once you achieve that expectation of Eternal abundance.

All the money that you want is available for you to receive. All you have to do is allow it into your experience. And as the money flows in, you can gently allow it to flow out, for like the air you breathe, there will always be more to flow.

You do not have to guard your money (like holding your breath) and not letting it out because there will not be any more coming. More is coming.”–end of book excerpt

The Money I Breathe

(BUT NOW I KNOW THAT)
The money I breathe is abundant
There’s no need that I hoard it in fear
How absurd if I seek
to breathe in advance for a week
for like air, more will always be there

The money I breathe feeds the moment
and enhances my life in the now
And the good it can do
means it must pass on through
more will come when I simply allow
–W.G.