CAVEAT #3: I SKEW THE RESULTS

It may actually be impossible for me to ever really get a pure, untainted impression of what life in China is like. Why? Well, to borrow a concept from the Dictionary of Scientific Experiment Phrases Applicable to Jamaicans in China: “I skew the results.”

I found this example of the use of the phrase on the web:

“If you add too much of a redox indicator you end up changing the equilibrium of the main reactants and skew the results..”

*A redox indicator (also called an oxidation-reduction indicator) is a substance that undergoes a definite color change at a specific electrode potential.(how appropriate, eee?)

I get a very skewed perception of people’s behavior as I walk the streets of China. Very few people are acting normally once they see me. I hate to belabor the point (if you’ve been following the journey from the beginning), which I’ve covered at length here (download the free ebook), but in certain quarters, my very presence changes the natural equilibrium of the main reactants, and skews the results.

Entire groups of people, families, tourists and little children stop what they’re doing, stare, point, turn around as I pass, point some more, quip amongst themselves, giggle, (some will turn and follow me for a while), when I walk by. Strangers ask to take their photo with me. People (men and women, uninvited, at least the men) reach out to touch me as I walk by.

Like a redox indicator, there’s just too much of a visual difference when contrasted with the everyday norm. It’s a bit of challenge for me to disappear into the crowd. I’m working on it, though.

Now, this is different from the familiar Observer Effect.

Observer Effect: The difference that is made to an activity or a person by it being observed. People may well not behave in their usual manner whilst aware of being watched or when being interviewed while carrying out an activity.

Of the people I meet, I get a uniquely friendly, foreigner-curious sampling of people and those who aren’t nervous about testing out their English-speaking abilities.

Many people have told me, “You’re my first foreign friend!” One woman saw me and her first words to me were, “Can I be your friend?”

Being the first foreign friend puts me in a unique position. For example, I’m learning things that tourists never learn, and that only transplants will ever know about life, living, learning, working, dating, marrying and more in China. I’m hearing things that people might not say among familiar Chinese ears. For example, did you know that most single girls are–um, well, why don’t I just save that for another post…..or the book!

On the other hand, as a first foreign friend, I’m sure there are many things I am NOT being told. As a foreigner, I’m sure there is some degree of “put your best foot forward for the visitor” going on.

So, with that said, knowing my prime directive and the questions I ask, my stance on non-judgement, and the fact that I’m skewing the sample, I’ll (finally) attempt to answer some of YOUR questions about being Jamaican in China (and Laos).

So, the second thing to know about my answers to your questions about life in China is that I’m very careful about how I interpret what I see, and how I phrase what I say about life in China. My Meyers-Briggs personality type is INTP (Introvert, Intuiter, Thinker, Perceiver) In contrast to its opposite type, which would be an ESFJ (Extrovert, Senser, Feeler, Judger; Look it up!!) I tend to perceive and observe without judging–at least, I make the effort. I live by the belief that there is no good or bad except believing makes it so.

For instance, it’s tempting to see smokers and smoking and think “bad,” or to see certain behavior and want to attach judgement-laden words to them. If you and I were talking about life in China, you might  often hear me use the phrase “what we might refer to as [fill in the blank]” For instance, I might say something like “I’ve noticed that in the subways in Beijing, there’s a lot of what we might refer to as pushy behavior.” I do this to separate the words I use to describe the behavior (i.e. “pushy”), from any judgement you might believe I am making about the behavior itself.

I’ve had interesting conversations with people who are visiting China, but who are unable to step outside of their predominant paradigm. Everything from vehicular traffic, personal habits, communication styles, dating expectations, to gender roles provides a never-ending, fun exercise in how to observe without judgement, how to see things as others who are not raised within a western paradigm might see them. The more you know about how people think, how the system works, the more that certain behavior makes sense given the new paradigm. Of course, I’m not saying anything remarkably profound here, but you’ll have a difficult time really understanding certain aspects of life in China if you are not aware of to what degree your own observations and expectations are flavored by a foreign (non-Chinese) paradigm.

Of course, I have my own pet peeves. Inhaling second-hand cigarette smoke is one of them. As much as I realize that the choice to smoke and the percentage of smokers in a country are functions of many things including politics, economy, health education, cultural norms, gender roles, etc., the distress I feel when I am forced to inhale it does not lessen with that realization.

However, I’m here in China with my own agenda and on my own dime and time. I’m not working a job, so I have the freedom to pick up and leave if the smoking or the (cold) weather becomes unbearable.

So, anyway, my point is simply that I strive to be non-judgmental in my observations of life in China.

Went to a wedding reception the other day. 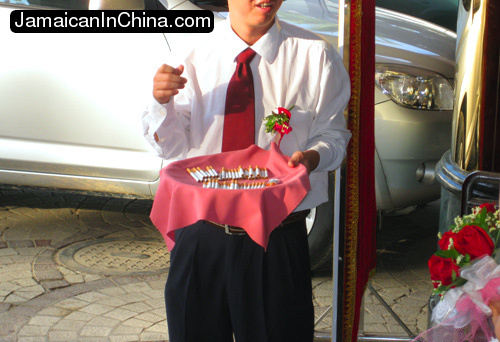 This man is handing out cigarettes. 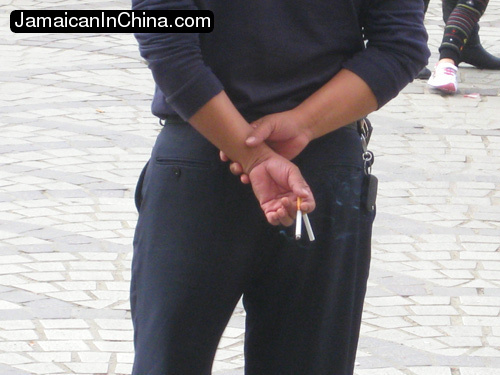 You can never have too many. (A spare, in case one goes out, I imagine) 🙂 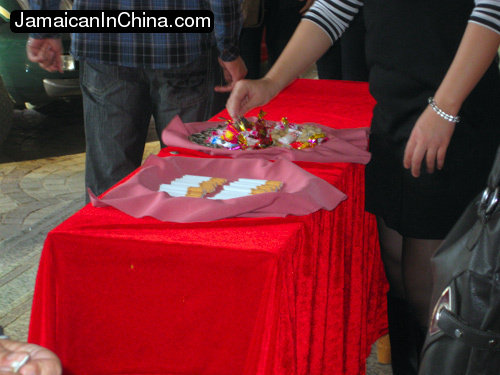 And, before entering the hotel for the reception, you can get candy and….cigarettes.

Yes, I’m still in Jinghong City, Xishuangbanna, Yunnan Province, People’s Republic of China! As the voting phase of the Jamaica Blog Awards draws to a close, I slowly return to regular posts. The purpose of “What’s Jamaican in China All About?” is intended to answer the many questions I receive about life in China.

However, before I answer, consider the following disclaimers as you attempt to understand my blog and the eventual answers.

Let him beware that the underlying question that permeates all my travels is “could I live here?” Given the natural things that are important to me (warm weather, sunshine, clean air, access to organic fruits and vegetables), the societal things (friendly people), as well as the household amenities (a kitchen and internet access), I make an overall assessment and arrive at a yep or nope.

If it passes the “Yep Test” and the majority of my wants and wishes are to my liking, I unpack, hang out for a while, and explore.

That’s one of the reasons I stay in a place for a few months. It takes time for the pall of the visitor paradigm to wear off and for the real rhyme, reason and rhythm of the region to take hold. And, as I’ve said before (and which some are tired of hearing), I’m not a tourist. A hotel is an unnatural setting. If I can get a real apartment, that makes it even better. That way, I can observe the comings and goings of regular folk. Watch how business is done, how quickly products and services are delivered, learn what the REAL price of things are, gender roles and dating rituals, something beyond the quick, superficial view of things you get through temporary eyes and with your boarding pass still in hand. 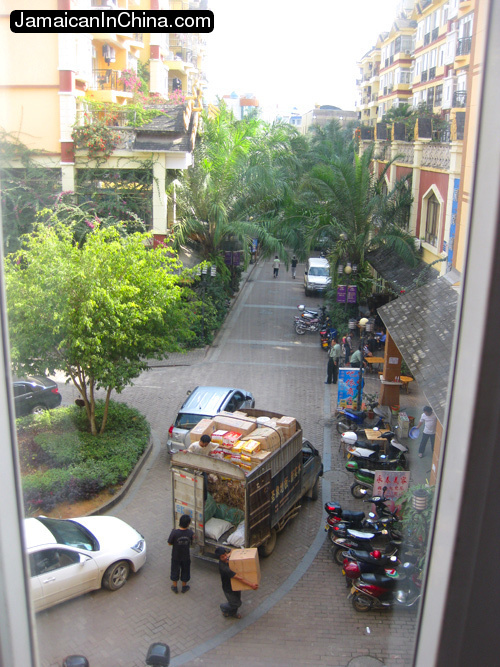 The comings and goings as seen from my third floor apartment 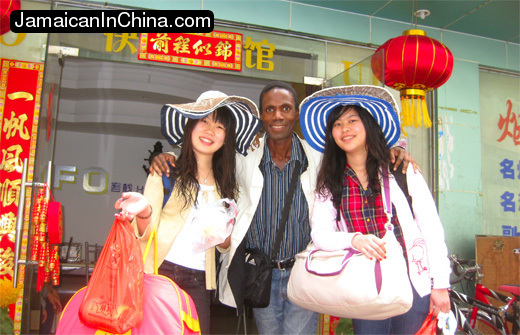 Recently, after reading one of my blog posts, a friend asked me, “What are you trying to accomplish?”
I was grateful for the question. It made me stop and think of a good answer. But before I explore and share that answer with you, I feel I must insert a few caveats, preambles, disclaimers, forewords, parentheticals (is that a word or a waltism?) and footnotes to establish the ground rules and a basis for mutual understanding.

So, what is Jamaican In China all about?
First, as a writer, it is simply the latest phase of my creative expression.

Second, it can be a travel log of sorts, exposing people to new places in a way and from a perspective they may not otherwise have the opportunity. I’ve been told that my blog offers a vicarious travel experience for the stay-cation (stay at home vacation) lifestyle.

Third, as the Passion Profit coach it is the latest manifestation of a lifestyle blog intended to show people one option to choose from and emulate. I’ve announced that my theme for 2011 is going to be “Reclaim Your Power. Break Free. Live True to Your Self!” In addition to its entertainment value, I’d like to think this blog can help people break free. How? By

I am Jamaican. I am in China. I am vegan. I am a minimalist. This is not the typical prism through which travel is experienced. (I have other predilections and peeves that define who I am, but I’ll save those for later.)

One of the things I’m aware that this blog is able to do is teach as well as entertain. Many people, myself included, have and had certain ideas of what China is all about. I don’t pretend to have a handle on a complete answer after only a few months here, but I do know that simply by being here, I am able to dispel certain ideas and misconceptions people have about China, its people and possibilities.
A few months ago, I wrote a facebook post where I threatened jokingly that I would hold my next blog post hostage until people spread the word about my blog to help me increase my subscriber list. A friend wrote back about my choice of (hostage taking/ransom) tactics, “…that’s what happens when you live in a communist country!” For those of us outside of China, that might be a humorous statement, but it does give some insight into what people perceive life in China to be like.

So, with that said, over the course of the next few posts, I’ll share my developing answer to my friend’s original question and many of the questions you’ve emailed to me (walt@jamaicaninchina.com) about what I’ve learned about China, and what I’ve come to learn about being Jamaican in China! Stay tuned!