Guess who's coming to dim sum. 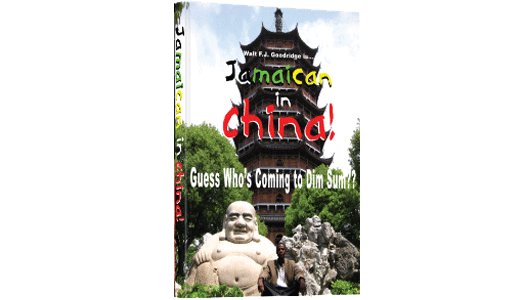 *Amazon price may vary.
We accept:

Use any of these links to download the full-color, PDF edition of Guess Who's Coming to Dim Sum: the Jamaican in China, my entire China adventure from the blog, but in book format including bloopers, outtakes and stuff not on the blog! It's a big file, so give it time to download depending on your internet speed!

In 2011, I returned to Saipan after spending six months in China, Laos and Singapore! It was an adventure the memories of which will last a lifetime!

After following the adventure on my blog, a few people wanted it have it all in book format. So, I created a Kindle and Nook versions.

However, that wasn't enough! They wanted a paperback copy to carry around with them and to share with their friends who didn't have those "new-fangled" Kindles or Nooks.

Other people wanted it in paperback so they could re-live the adventure while relaxing on the beach or in the park away from radiation-emitting computer screens and technology. They simply wanted to enjoy immersing themselves in a fun story the old-fashioned way: by turning pages and feeling the weight of a real book in their hands.

Well, I can deny them (and you) no longer!

Therefore, as of just a few minutes ago, on the Amazon.com website (or directly from me), you can get the 340 fun-filled, fact-focussed, freedom-fostering pages of my 6-month Jamaican in China experience in Jamaican in China: Guess Who's Coming to Dim Sum, THE PAPERBACK BOOK!

HERE'S WHAT YOU GET: OUTTAKES TOO RACY FOR PRIME-TIME EMAILS FROM FANS & FOLLOWERS
(with tons of insights and world view explanations from my Chinese friends!) BEAUTIFUL BACK COVER, TOO!!
(YES, I've thought of everything!) IMPORTANT: Make sure you order the version you want. There is a color version (1) and a black & white version (2).

Who is Walt Goodridge?

"Once upon a time, there was a Jamaican civil engineer living in New York who hated his job, followed his passion, started a sideline business publishing his own books, made enough money to quit his job, escaped the rat race, ran off to a tropical island in the Pacific, and started a tourism business so he could give tours of the island to pretty girls every day....and live a nomadpreneur's dream life."

Dedicated to:
my mother, Thelma Rose Goodridge
my father, Nyembane Ndobe Goodridge
to my grandfathers, Clement Golding and Charles Frederick Goodridge
and to my grandmothers Isolene Rebecca Golding and Gladys Eunice Goodridge
go to Contents