Ok,Ok…Yes, I know these are sophisticated, adult ladies, I know, I know. I just think “The Embassy Girls” has a nice ring to it, like a television series, you know? Like a Jamaican Charlie’s Angels…:-)

Anyway, YES! You guessed it from the subject line, I finally made a visit to the Jamaican Embassy in Beijing, China! 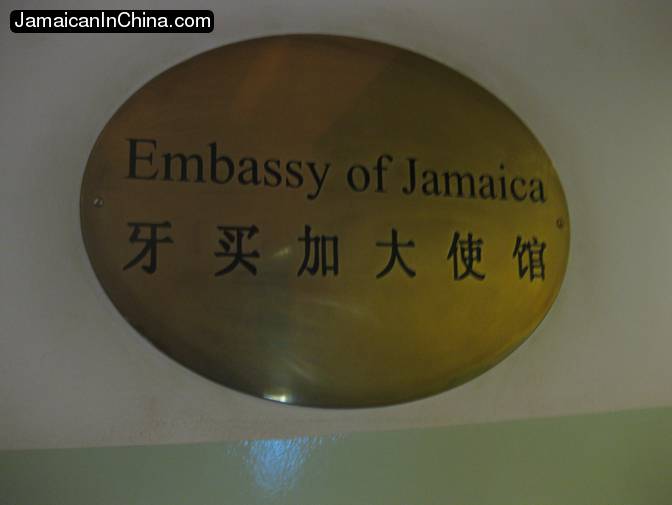 It was an unannounced visit, but Attache and Vice Consul, Christine Barker, was nice enough to meet me at the Jianguomen train station (# 1 and #2 line) and guide me back to the Embassy’s location on the 7th floor of a 17-storey building in the Jianguomenwai Diplomatic Compound! Thanks, Christine! 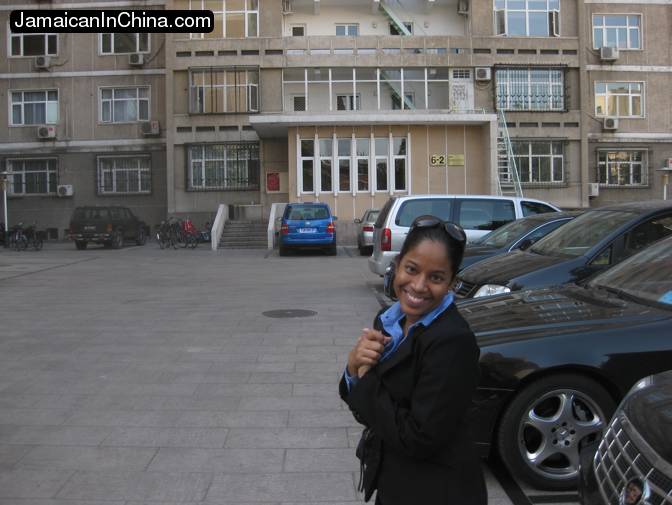 Welcome to our humble….um, office building

As this was during the Golden Week National Holiday, the Chinese staff at the embassy was out, and so was the Ambassador. So, it was just me and the girls getting acquainted during my short visit.

Minister Counsellor Jacqueline Bell, Attache and Vice Consul, Christine Barker, and Administrative Attache Keera Clarke do much more than filing. They perform a wide range of tasks! There’s processing visas, renewing passports, providing support for Jamaican nationals, promoting a positive image of Jamaica abroad, as well as sensitive communication on behalf of the ambassador, plus a host of other duties I’m sure they DIDN’T reveal to me in the interest of Jamaican national security! 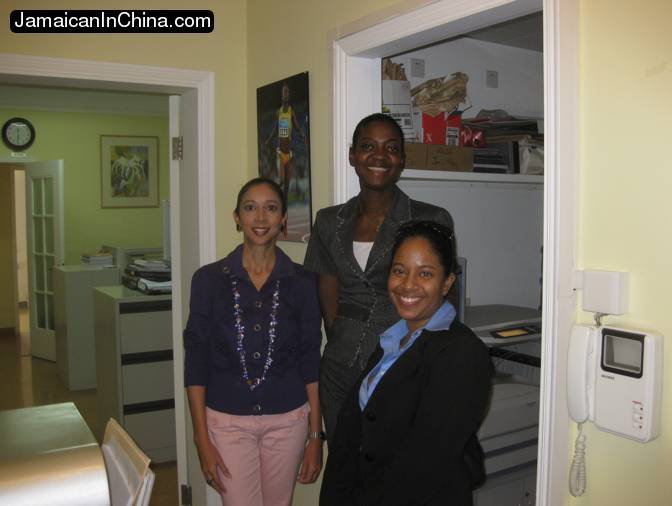 Jacqueline, Keera and Christine. The Embassy Girls (Weeknights at 8! Check your local listings)

Here are a few facts I learned during our chat:

1. About 600+ visas each year are processed for Chinese nationals and residents who wish travel to Jamaica. Too low! We have to do something about that!

2. There are only about 40 Jamaican citizens registered with the Embassy as “Living in China”! So, assuming there could be just as many who HAVEN’T actually registered, that still probably puts the total number of Jamaicans in China at less than 100. No wonder I haven’t seen any Jamaican beef pattie shops in Beijing! We’ll have to do something about that, too. (Of course, give me a few months by myself to um….check out the um….you know, the um lay of the land before you start sending any more Jamaican men. I think I can handle the, um, research on my own…I’ll let you know when I’m finished here.) I might someday soon go back to Jamaica and stay in accommodation similar to Exceptional Villas can offer so I can get to my Jamaican beef pattie shops! (And relax a little too.)

3. And finally, I learned that being so far away from home, friends and family back in JA, makes the girls a bit homesick at times. So, if you’re reading this and want to brighten up their day, do me a favour and send an email to a special address I’ve created that will forward your message directly to them! Send well wishes to embassygirls@jamaicaninchina.com 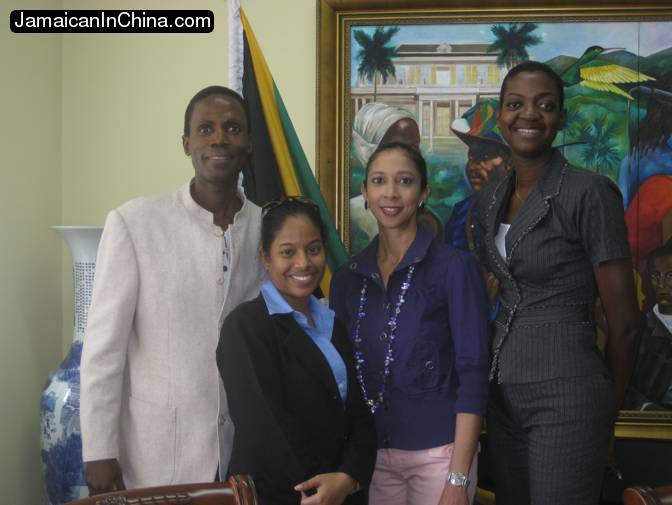 Please note the colours of the Jamaican flag for future reference. I don’t want a repeat of last time. Ok, people?!!

This was definitely a high point of the week! Not just because of the new friends I’ve made, or the things I’ve learnt, but also because of something a bit closer to home that you may have to be Jamaican to really appreciate. I mentioned this in aSaipan Tribune article when I ran into my musician buddy and fellow Jamaican, Wayne Wright, on the island of Saipan, in the middle of the Pacific, 8,000 miles and 19 years away from where we last saw each other.

Every time you meet a fellow Jamaican somewhere overseas, you take a little trip back home before you even utter a word to each other. There is a knowingness, a tacit understanding of a shared culture, a shared experience, and what it feels like to be Jamaican in the wider world of people and places. And then, when we DO speak, to hear that familiar cascading Jamaican lilt and musical intonation,(The Trinis and the Bajans know it, too) and to be able to break into our trademark patois to further forge invisible yet powerful bonds of connection and camaraderie–because the sound and syntax IS a uniquely Jamaican creation–it is familiar and comforting in a way that no song or sonnet can capture.

Of course, I’m sure every citizen of every country can say the same thing, but, of course, we feel our story is just a bit more special, a little different. From the Arawaks to the Maroons, from Bob to the bobsledders, in our story we share a little secret between us that only Jamaicans know. Because of our relatively small size as a nation, as well as our pantheon of personalities and their relatively huge impact on the world, there is a shared pride in our uniqueness and strength! We know what we are capable of. As we say in J.A, “we likkle but we talawah!”

Thanks for the trip home, ladies.

And in a public but private “Jamaicans only” response to Jacqueline, who made a comment about my appearance,

(My apologies to the non-Jamaicans in the audience. You’ll have to sit that one out!) 🙂

Bob = Bob Marley (Every Jamaican is duty-bound to quote “Bob” at least once in every serious discussion of politics, religion, or life in general)

Maroons = Escaped slaves who mounted a successful 80-year resistance to British domination; and who granted the British government’s request for a peace treaty which is still in effect today.