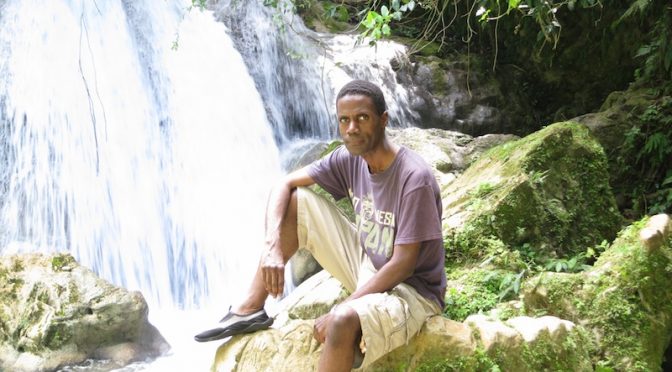 Wed, April 24, 2013
This time we’re heading east! I figure we should have some nice views of the ocean driving along the south coast and then up towards the north coast. Our destination: Port Antonio!
See the route (in red) along the coastline

Sure enough, the views were spectacular!

and then a little inland while still in St Thomas…

Then, back along the coast through Portland.

And that’s how we ended up at Reach Falls.

I prefer just sitting in the sun

After Reach Falls, we continued north through (5)PORTLAND, took a quick look at the famous Blue Lagoon, and eventually reached Port Antonio, where we checked out the Errol Flynn Marina

Then, we hit (6) ST MARY, Headed further along Buff Bay and Annoto Bay,

…then south back into St. Andrew by nightfall

Ron got some Jerk Chicken while we were in Port Antonio. Meanwhile, by the time we got back to Kingston, it was too late for me to eat, so I picked up a bag of banana chips at a supermarket, and called it a night. No worries. I’ll definitely eat a meal tomorrow.